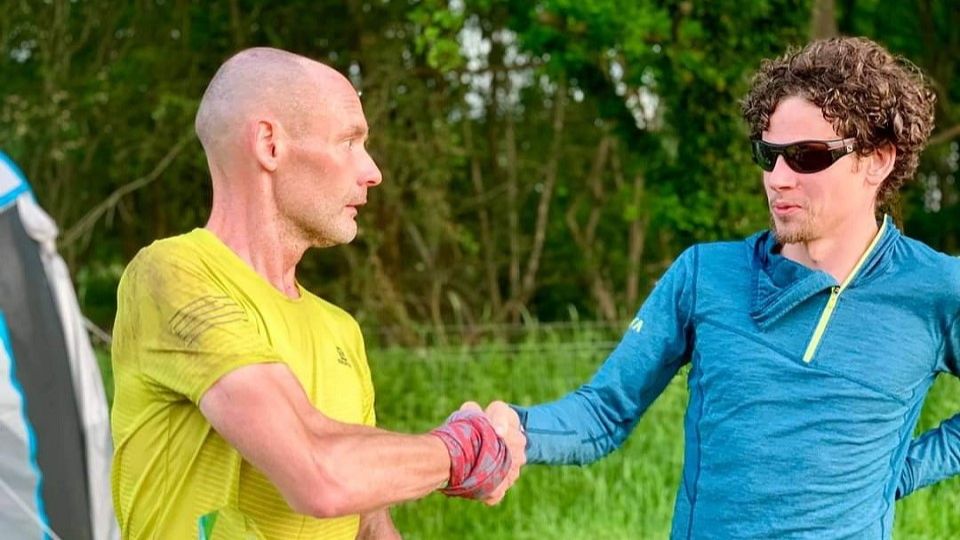 Could you run four miles an hour – for 81 hours?

John Stocker (pictured above, left) might not be instantly recognised by runABC readers but he has just broken a revered world best by being the last man standing in the Suffolk Backyard Ultra organised by Challenge Running at Knettishall Heath Nature Reserve, near Thetford, that started at 12:00 noon on Saturday 5 June and finished at 9:00pm on Tuesday 8 June.

This extraordinary event, based on an original concept by enigmatic race promoter Gary Cantrell in Tennessee, USA (Big Dog's Backyard Ultra) sees just one finisher as every other competitor is cruelly recorded as a DNF (did not finish).

Matt Blackburn was the first of the 122 non-finishers listed, despite also going further than the previous record by completing 333.34 miles (80 laps) locked in combat with Stocker. Matt failed to finish his 81st lap within the hour to hand victory to Stocker, whose fastest lap was 42:05 and slowest 52:31 – leaving typically just 10 minutes an hour for fuelling and ablutions.

The rules are that a full loop (known as a 'Yard') of the tough, multi-terrain trail of 4.167 miles must be completed within the hour, every hour, until the runner can no longer achieve this feat. Why 4.167 miles? That's because 24 hours completed equals 100 miles – and 24 men and one woman succeeded in that mission in Suffolk!

The winning lady was Rachel Piper who was timed out on lap 29 after completing 116.67 miles but spare a thought for runner-up Alison Walker who crashed and burned on lap/hour 24 with 95.84 miles recorded.

There simply is no arguing with the body when it has had enough punishment, although some runners seem to be astonishingly durable and capable of extreme feats of endurance and sleep deprivation while competing in a 25C (77F) heatwave.

This was the very first Backyard Ultra race to be held in England and race director Lindley Chambers said: "What these guys have achieved is pretty incredible. I knew we had the calibre of people taking part and I personally thought we'd do 50 or 60 loops but these guys have gone beyond my expectation and have gone further than anyone else in the world competing in this format."