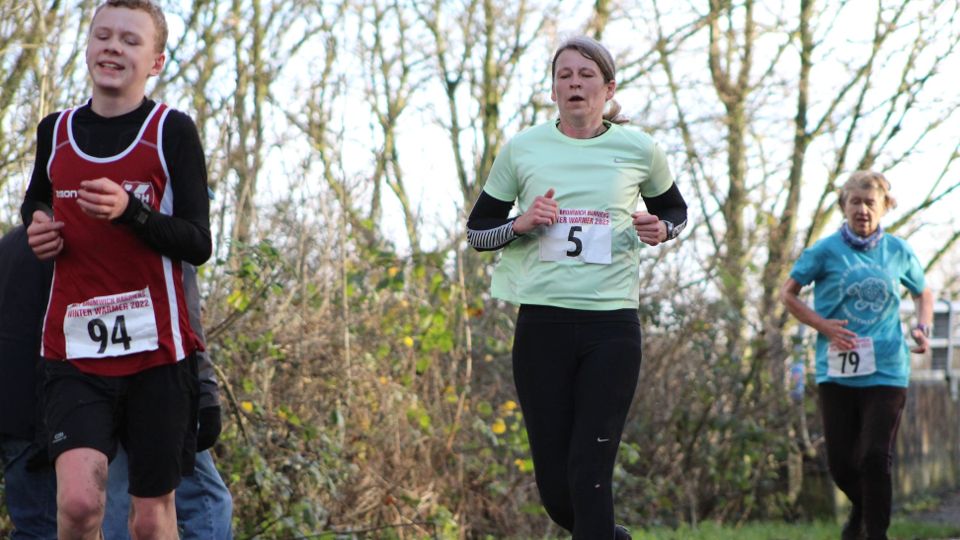 Muddy good run for everyone to begin the New Year.

It was all the fun of the fair and a side order of mud at Sunday’s (2 January) West Bromwich Harriers Winter Warmer 5 Mile race. 100 runners took part in this multi-terrain race on an adjusted course finishing on a high, not least for Jason Bennett.

This was the third outing for this well organised event from West Bromwich Harriers that has become a ‘must do’ for many people and well supported by local running clubs.

There is nothing like a good thrash through woodland trails and along footpaths to get the blood pumping, especially after the festive feasting and end of year carousing. This race provided that and more as runners, many from local clubs, made the most of the route and conditions that included a lap through the fairground and Christmas lights before continuing onto the trails.

Jason Bennett of Birchfield Harriers was first home in 27:58, a course record. Toby Oury of Aldridge RC followed him in second in 29:37 with Gary Whitehouse of Tipton Harriers third in 29:43.

Anne Kenchington of Birmingham Running, Athletics & Triathlon Club (BRAT) was the first female in 29:56. Lynn Hill of Tipton Harriers was second in 33:11, just over two minutes ahead of her teammate Amelia Harrison who finished third in 35:18.

The full set of results is available via the runABC Midlands Race Listings page.

Changes to the course didn’t dampen the enthusiasm for the race as confirmed by Race Director Dave Long who said: “Despite setbacks and issues with the original route, it was great to be able to hold an event in a local park and see runners of differing abilities cross the finish line a little muddy but with big smiles on their faces.”

The race received a ‘thumbs up’ from runner Lee Harris: “Brilliant event in an epic setting right on our doorstep and amazing organisation and support yet again. Well done West Bromwich Harriers and see you for the Summer Sizzler”.

A note for your diary: the Summer Sizzler 5K is on Wednesday 7 July.