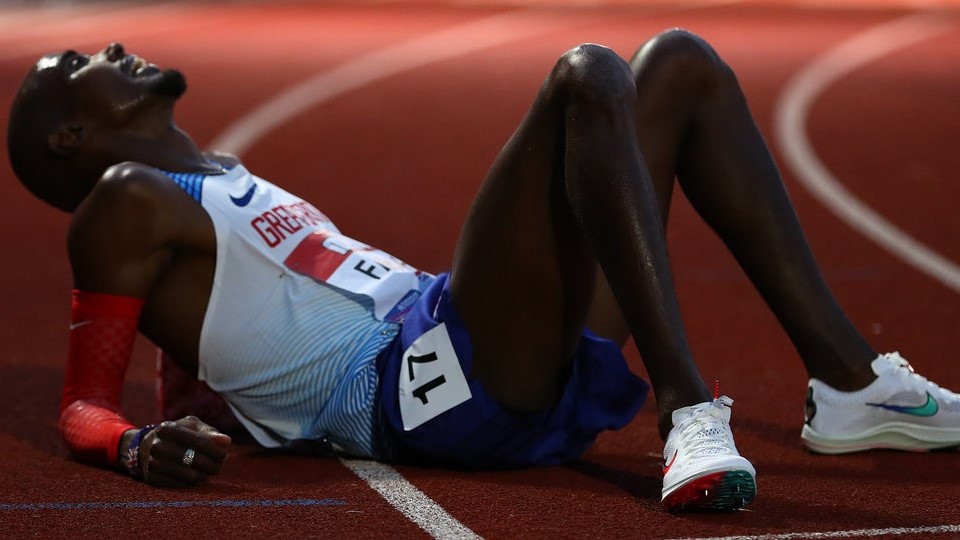 Down but not out – Sir Mo Farah plots Olympic defence

Müller British Championships will feature an invitational men's 10,000m to help Sir Mo Farah in his last-minute quest to defend his Olympic title

Until the Müller British Athletics Championships European Cup and Olympic Trials race at Birmingham University on 5 June, Sir Mo Farah had gone undefeated at 10,000m for 10 years and had never been beaten over the distance by a fellow Briton.

All that changed when a frustrated Farah fell just over 22 seconds shy of the Olympic standard of 27:28.00 in a lowly (for him) eighth place, one position behind Marc Scott who booked his ticket to Tokyo in exuberant fashion having already secured the time in the USA.

We now know Farah was hampered by an ankle injury in Birmingham after a superb training stint in Flagstaff, Arizona, and the 38-year-old Newham and Essex Beagle is still confident he can go to Tokyo in less than six weeks time to defend his Olympic 10,000m titles from 2012 and 2016 – and with 10 global gold medals in the last decade, who would doubt him?

When asked if he believed he could still win at the Olympics, Farah replied: “Yeah, I believe so. It will take courage and balls to be able to go out there and mix it with the guys.”

The problem, apart from rapid rehabilitation from his ankle niggle, was always going to be finding a suitable race in time to beat the qualification deadline of 27 June. The solution, thanks to British Athletics, is the addition of a special invitation 10,000m race at the Müller British Athletics Championships at Manchester Regional Arena on Friday night, 25 June.

Few athletes could cope with such pressure but if Farah is over his injury and the shock waves of his defeat earlier this month he will be assisted by pacemakers and an international field to achieve the necessary 27:28.00 – surely well within his compass as his PB stands at 26:46.57.

The Friday night 10,000m will be just one highlight of a packed weekend of crucial Olympic Trials events and any remaining tickets will go on public sale at 10am on Monday 21st June. The event will be live-streamed across all three days on the British Athletics website.

The 10,000m on Friday night at the AAA/British Champs used to be an exciting feature event and past winners include Dave Bedford in a world record 27:30.8 in 1973 and Brendan Foster in 27:30.3 in 1978 – a memorable European record in pouring rain at Crystal Palace witnessed by this writer. Friday 25 June at 9:35pm is crunch time – could it be Mo time?