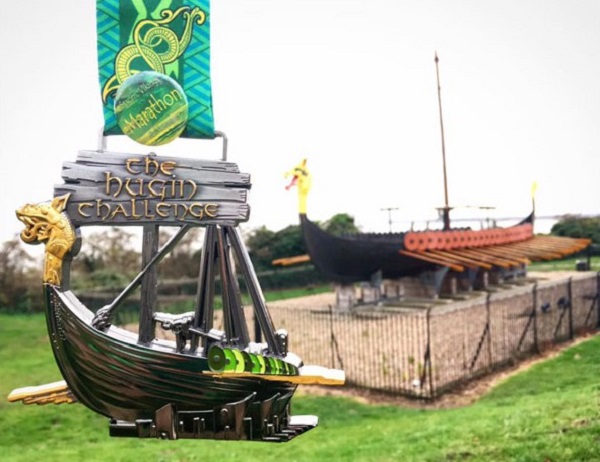 Hugin and runnin' at Pegwell Bay

The intricate bling pictured above, with the real thing in the background, was among the rewards on offer in the Hugin Challenge organised by the legendary Saxons, Vikings and Normans Marathons and Challenges team at Pegwell Bay Country Park on Tuesday (26 November).

This unusual, mid-week ultra-marathon was held on a 4.37 mile loop course (six laps for a marathon) with an official six-hour time limit, starting at 9:00am. All in a day's work, then!

Pegwell Bay is renowned for its scenic location between Thanet and Sandwich, forming part of the nationally important Sandwich and Pegwell National Nature Reserve. It also has many visitors keen to admire the Hugin – a replica of a Viking ship that sailed from Denmark in 1949 to celebrate the 1,500th anniversary of the invasion of Britain, the traditional landing of Hengist and Horsa and bethrothal of Hengist's daughter, Rowena, to King Vortigen of Kent.

All that history was no doubt lost on the bulk of the 50 competitors as they circled the course for more than six hours in an attempt to complete up to eight laps of the wet and windy course.

It could be said that running miles dominates the psyche at Saxons, Vikings and Normans events, to the extent that a league table is maintained through the SVN Club. SVN branded hoodies are awarded to runners at each 1,000 milestone and at interim 500 miles completed 'Elite Runner' status is conferred, with personalised event number and VIP registration.

Read all about the amazing SVN events here