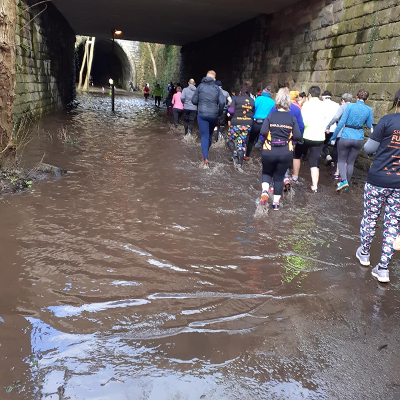 Testing the water at the Ashbourne Seesaw

The flooded section under the road bridge was Marmite for runners at Sunday’s (1 March) Ashbourne Seesaw and one of several water features at this challenging event. Soggy feet (and paws) aside, the conditions didn’t spoil the runners experience of the Tissington Trail.

Ahead of race day organisers SBR Events kept everyone abreast of the situation regarding the course, in particular the road bridge and tunnel at the start and finish. Recent downpours led to flooding underneath this bridge – although the tunnel was clear – and a waterlogged section at Tissington Station along with a few puddles. Water had been pumped away from the affected area only for it to flood again several hours later.

Forewarned is forearmed as runners turned out on a cold, sunny morning at the Ashbourne Seesaw – previously known as the Ashbourne 10. A half marathon had been added to the regular distances of 5K, 10K and 10 Miles. The 5K option was open to walkers as well as runners. Canicross runners had the choice of 5K and 10K and both of these started an hour earlier at 8.30am to avoid congestion.

Two and four legged participants faced an out and back course hence the ‘seesaw’ that had a gradual climb on the way out followed by a gradual downhill on the return. The event was held on the picturesque Tissington Trail, popular with walkers, cyclists and horse riders, several of whom offered words of encouragement plus there was more support from the cheerful marshals.

Participants ran and waded their way to the finish where a Tissington Trail themed medal was their reward for cold, wet feet. And paws. Eye-catching event t-shirts were available to purchase.