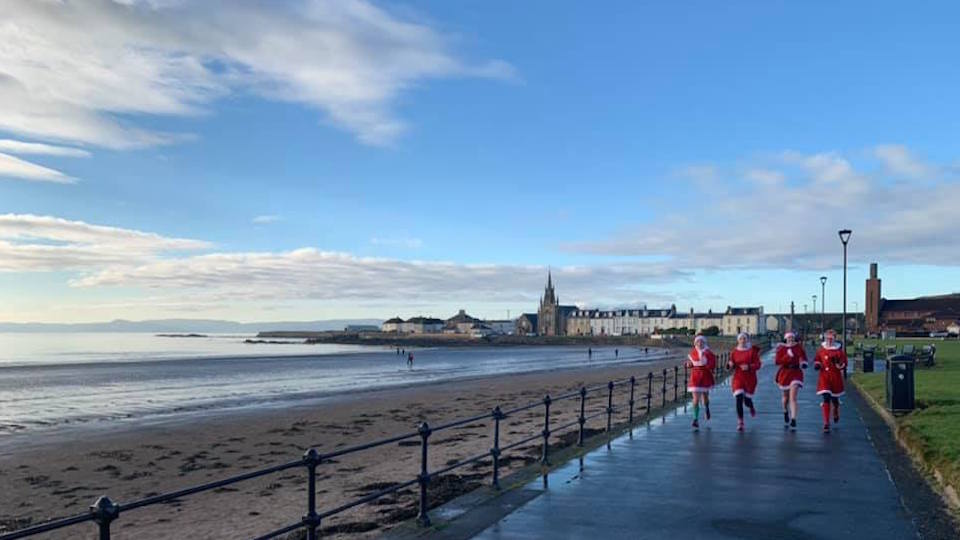 Over 100 Santas, Mrs Clauses and junior St Nicks appeared on the streets, paths and trails of southwest Scotland on Sunday to log their miles for the second annual North Ayrshire Santa Run.

Nearly 300 runners took part in the inaugural event last December, but this year’s outing was, by necessity, a virtual affair. Despite the organisers, Blue Sports, creating a detailed plan for a COVID-safe ‘real life’ run, the local authority took the view that no such events should go ahead.

Blair Pettigrew from Blue Sports told runABC Scotland online that despite the setback, they were determined to keep the event going this year, any way they could. He told us, “So many events that get cancelled get lost from the calendar. As we’re not yet an established event, we felt it was important to keep the continuity going.

“But it’s not only that. If we cancelled the event, our charity partner would lose out on the fundraising too. It’s good we’ve been able to do it. We’ve had lots of positive feedback from the community, which has reassured us it was the right thing to do.”

Pettigrew told us that in addition to the obvious benefits of being able to run at their own time, in their own locations and with their own families, the scattering of Sunday morning Santas brought ‘pockets of Christmas cheer’ across the region.

He added, “It was great to see people not involved with the run posting pictures on social media of various Santas running by their houses or the shops. It’s quite different from having one big Santa Dash.”

This year’s run was held in support of the Night Before Christmas Campaign, a Scottish charity distributing boxes of goodies to less fortunate families and the homeless. Last year, over 6000 boxes were packed and delivered, all by volunteers.

Pettigrew said. “We’re very pleased to be able to support the Night Before Christmas Campaign. As a charity, it fits well with the spirit of our run, which is all about Christmas and taking part. We were delighted to see so many runners make donations when they picked up their suits, too.

“We'll be able to donate around £500 to the charity this year, and look forward to partnering with them again in 2021.”

As a non-profit organisation ‘designed to harness the power of sport’ in bringing communities together, what are Blue Sports’ plans for the Dash next year?

“Not quite world domination,” Pettigrew told us with a laugh, “but we feel there is a lot of room to grow. It's all about bringing people together."

He added, "We’re keen to have the event become a family tradition for everyone, and not just runners. You can see from the pictures on social media that the run really is for everyone, including families, people in wheelchairs, children in pushchairs, and pets too. It really is for the whole community.”