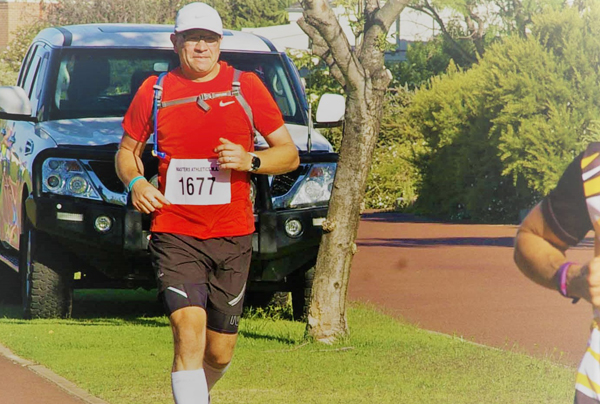 Manchester exile Michael Brown is finalising his preparations for the 2018 Tour of Tameside and looking forward to repeating the four race challenge he enjoyed last year. Now based in Perth, Western Australia, Michael has to plan his training runs with a 5.30am start to avoid the fierce Australian sun.

The ex-Droylsden resident told runABC North: "I live in the Perth foot hills which is an ideal situation for 'bush running' which you would class as trail running / cross country. So most of my runs during the week are bush runs on tracks which are either pea gravel or sand and include the added benefit of honky nuts (gumnuts from the gum trees), to catch you unawares if you are not careful. You also have to watch out for the colourful natives - kangaroos and lizards and the odd snake or horse rider now and then.

"Comparing this to running in the UK is difficult as they are two totally different environments to run in and both offer different challenges and enjoyment. The one thing I would say is you don’t get the pleasure of running in the rain very often in Perth and I look forward to the days when it is raining and I can go for a run (strange I know, however when you are always running in the heat you crave the odd things!)."

Michael, who emigrated to Australia in 2000, attends Sunday morning athletics events which gives him the chance to run on firm surfaces. He is a half marathon regular and also takes part in a local trail running series during both summer and winter months although trail running in the countryside on open tracks is his favourite session.

Michael brought some good weather with him from Australia for the 2017 Tour of Tameside and has promised to do the same this year.

Enter one or all of the Tour of Tameside races at the Sports Tours International website.

The 2018 Tour of Tameside will be run over four days: