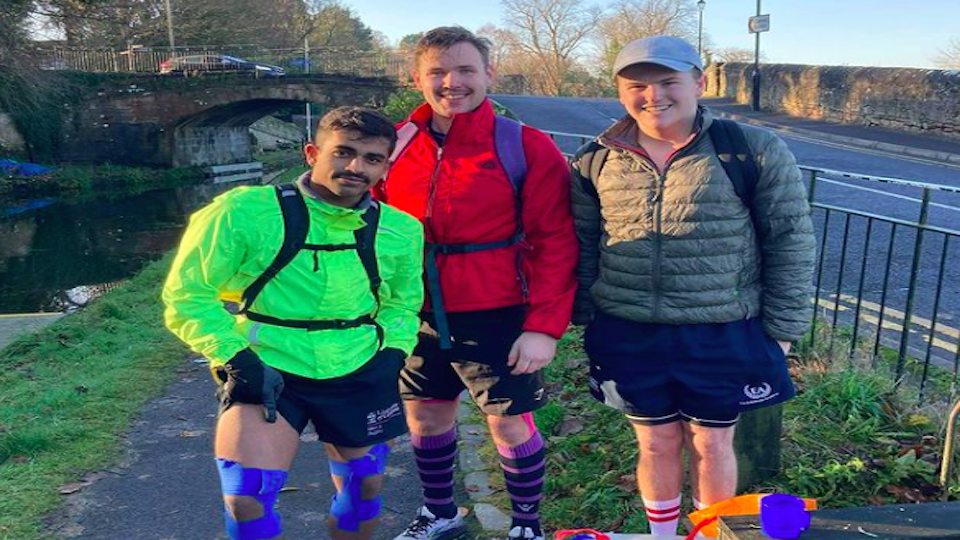 Their efforts have so far raised over £5000 for the Movember movement, smashing their original target of £3000.

The trio only started preparing for their challenge at the end of October (‘not ideal’), by speaking to all the runners and ultrarunners they could – including the parents of some of their friends. They built up their mileage gradually – and not past the marathon distance – running together as much as possible. With a daylight-maximising 3am start planned for the day itself, the friends also started getting up at 2am in the final days of preparation to acclimatise their bodies.

Anderson admitted: "It was a struggle to balance university work, early starts and training. Some days you’d wake up at 5am and couldn’t be bothered to get out of bed, but you’d call the others and get each other going."

With between 12 and 16 hours in mind for the challenge, good planning was essential. Support teams, put in place every 22km or so, gave them food and water, as well as a valuable boost to their morale.

Anderson said: "The last 20km was a real mental slog. Everything was hurting, and Pri particularly was struggling with cramps and seizures in his leg. It really was mind over matter for the last miles."

It was at that point that the trio abandoned their plan to break down the distance by running nine minutes and walking one. Instead, they just listened to their bodies and ‘tried to run through it’.

"But the plan still was that no matter what, we’d stick together. There was no doubt in my mind that we’d finish. If something happened, it would just be a case of carrying him to the end."

In all, the trio took 14 hours to complete their challenge, finishing off their 100km journey with a victory lap around Murrayfield.

After several weeks of training together, 2am starts and 100km, their friendship remains intact, too. "There were times on the run that we had to give each other a hard time to keep going, but the experience brought us all closer together."

After congratulating them on their achievement, runABC Scotland online noted to Anderson that she’d never met a rugby player who actually liked running. He laughed, admitting: "I might be a convert, but I’ll have to give it a few days to let my body heal up a bit. It’s a bit worse for wear right now.

"But I can see the positive impact of running on my body, especially in terms of weight distribution. I’ve lost weight and gained muscle."

With that in mind, we asked, might there be another challenge next year? He said: "We’ll give ourselves a month to recover then look at next year, and start training properly.

"But we’ll have to go one up on this year. We might have to go there and back!"