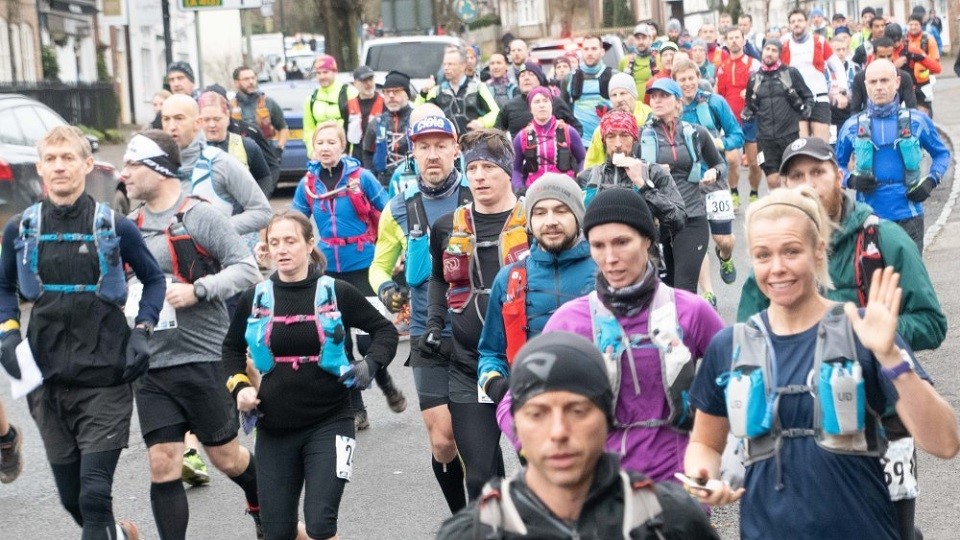 Ultra season is up and running as 277 gain ITRA points

The rain that fell during much of the Country to Capital Ultra by Go Beyond Challenge didn't dampen the enthusiasm (much) of the 277 finishers in this traditional season opener to the ultra-marathon calendar on Saturday 8 January.

At least the start outside The Shoulder of Mutton was held in dry conditions at 8:45am after registration had been completed in the Grade II listed 18th Century pub on Pound Street, Wendover, nestled in the glorious Chiltern Hills.

The 43-mile point-to-point course soon leaves the main road and heads for the hills before joining the Grand Union Canal at Denham for the towpath run to the finish at the welcoming Waterside Cafe on the remarkably tranquil Little Venice Canal basin in central London.

The terrain is approximately one-quarter road, country lanes, and footpaths; one quarter cross country trails and one half canal towpath. Elevation gain is 1,375 feet (419m) and loss is 1,720 feet (524m) – so net downhill.

Unlike last year's event, postponed to May due to the pandemic, there was a mass start rather than an individual time trial. This event is a qualifying race for the Ultra Trail du Mont-Blanc, with three precious  Endurance Points awarded by the International Trail Running Association.

Conditions underfoot were very muddy in places but despite this additional handicap, 2:23:06 marathon runner Richard McDowell, of Hercules Wimbledon, was under five hours with 4:57:27 for his victory. Richard was followed across the finish line behind Paddington Station by Ed Knudsen (Avon Valley Runners, 5:17:01) – whose span includes 15:00 for 5K and 144 miles in 24 hours! Alfie Pearce-Higgins (5:27:04) was third overall.

The first ten men finished inside six hours and five women beat seven hours. There were 297 starters registered and the final runner reached the finish in 10:50:16.

To sample the attractions of Country to Capital Ultra you can view the 2021 race video here: