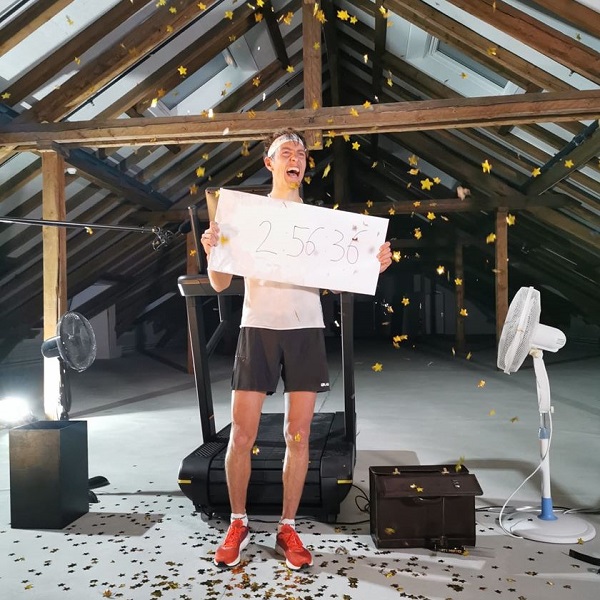 It seems that staying in is the new going out, if you want to break a world record. Swiss athlete Matthias Kyburz is the third runner to set a new 50K treadmill best this year; in his first ever run at the marathon distance or beyond!

Often described as, 'cunning running', orienteering requires a unique set of skills. Map and compass navigation is combined with stop/start running ability, as competitors plot the best route at speed from point to point through diverse, unfamiliar terrain. The sport was originally used as a training exercise in land navigation for the Swedish military in the late 19th century.

Quite how an elite orienteer would transfer those abilities to the monotony of the rolling road was part of the fascination of this latest tilt at the 50K treadmill best last Thursday (16 April).

The target was 2:57:25 established by German ultrarunner and Wings for Life World Run winner Florian Neuschwander in February, shortly after the American Mario Mendoza ran 2:59:03 in January this year. Prior to that, runABC South had reported that Stuart Leaney from Somerset was going nowhere fast as the world record holder with 2:59:39 in December, 2016.

So, back to an empty barn in Switzerland and one man's quest, witnessed by officials from Running.COACH Sports Club and Salomon Running. After a gruelling 2:56:36 the record was in the bag and celebrated with a self-generated confetti shower and a kiss from his wife!

Kyburz averaged 5:40 per mile pace and managed a negative split after a steady first 25K. Despite looking smooth throughout – you can watch the entire three hours effort here – he admitted struggling at 30K and had to push through a dizzy spell around the 38K mark.

This extraordinary feat has raised a huge sum for Swiss Solidarity's appeal to help fight coronavirus in Switzerland. Revealing some prior experience of treadmill record setting, Kyburz said: “I haven’t done anything like this in eight years, when I did a world record attempt. It was 12 guys and we ran on the treadmill for 24 hours and set the world record but that was only two hours on for me.”

With the record achieved Kyburz knew exactly how he was going to celebrate: “Recovery is easy because I will go home because you should stay home, so I’m going there and laying on my sofa and eating a hell of a lot of chocolate,” he said. “I think this is what I’m going to do the next two weeks.”