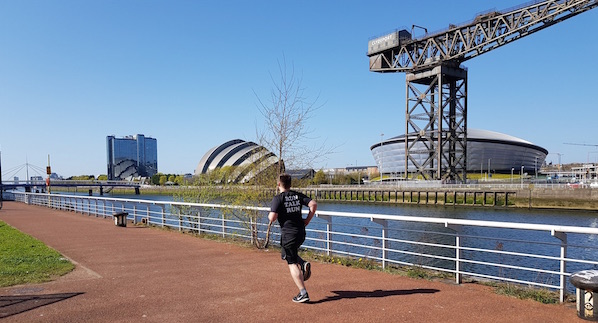 RunTalkRun Glasgow was set up by physiotherapist Jamie Wieland. He told runABC Scotland online: “Last summer I had three bereavements, and it was a fairly bad time. By chance, I came across an article in Runners’ World about RunTalkRun, and thought it was a great idea. I also thought it was something that would have been helpful for me at the time, but there was no branch in Scotland.

“I thought no more about it until I discussed it with my girlfriend. I wouldn’t normally have put myself forward for such a thing, but with her support, we made contact with Jess and got the ball rolling.”

Wieland held his first session just before the Christmas holidays, with one other runner. By the time of his ninth run – and his weekly sessions being brought to a halt by Coronavirus – up to nine other runners were joining him from a community of about 14: ‘a nice small group’, as he puts it.

The format of RunTalkRun outings is the same for each of their 70+ runs all over the world. The session starts with the leader reassuring runners that the group is a safe space for them to talk about anything they want, in complete confidence. Members are encouraged to talk about issues having an impact on their mental health in particular, but all conversation is welcome.

When it comes to the run – a 5k at an easy pace – leaders stick to the pace of the slowest runner. Slower runners can walk if needed; faster runners are encouraged to run ahead and double back. As Wieland says: “We’re a talking group first and a running group second.” After a RunTalkRun session, runners head to the base where they’ve left their bags, or in RTR Glasgow’s case, the Glasvegan café near the Clyde.

With all group running banned after lockdown, it’s been some weeks since Wieland has had face-to-face contact with his runners. But that doesn’t mean the valuable support his group offers has stopped, too. Wieland has set up a Facebook page, which most of his runners have joined. Like his weekly runs, it’s a safe space for everyone to talk.

As leader, he makes a point of being available for chats at 6.30pm on Thursdays, at the same time as RTR’s usual sessions, but runners are free to comment at any time.

With the group's first runs held in the early days of Coronavirus, it was unsurprising to hear that the outbreak had been weighing on runners' minds. He said: “For the first two or three weeks, there was as a lot of stress and anxiety about Coronavirus, in the group and in my work in the NHS. Now, it’s a bit more normal. The anxiety has dissipated – people are just fed up now. What we are seeing, though, now, is a lot of chat about loneliness in lockdown from people living on their own.”

Like many traditional running groups seeking to engage members and offer them some helpful structure in these unsettling times, Wieland has been setting virtual challenges. Last Thursday he asked his group to attempt their first ‘virtual 5k’, on the same day as their normal session. Seven of his runners took up the challenge. When lockdown is lifted, Wieland plans to target a ‘real life’ parkrun or 10k.

Membership of any RunTalkRun group is free, and can be done through the ‘MyCrew’ app.

Though there are slightly more women than men in Wieland’s group, he feels men are certainly getting better at communicating. He said: “It’s good to see guys in my group. Men tend to shy away from the mental health side of things, but they are getting better at sharing. Social media has helped a lot on that front too. I make a point of being open with my own stuff in the group, too.

“But everyone should feel free to come, male or female, at any skill level – even if you are a beginner or have never run before. RunTalkRun isn’t there just for people struggling with mental health. You don’t have to have a ‘diagnosis’ as such to come along and talk.

“We’re not trained mental health professionals – but we are there to listen, talk, and share, and hopefully take some weight off your shoulders.”