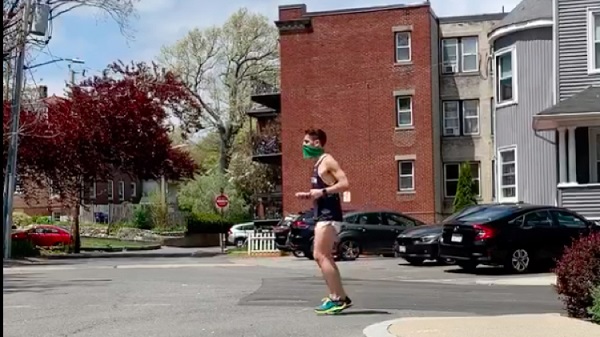 David Melly believes he may have discovered the antithesis to hard virtual racing by running the slowest possible mile in lockdown in Boston, USA, home of the world's oldest marathon. On Friday 15 May, with perfect running technique, the former elite track performer ran 19:38 – 8:34:00 marathon pace!

David Melly grew up at mile 16, and now lives at mile 22, of the fabled Boston Marathon course and is a graduate of Cornell University, where he was captain of the athletics and cross country teams. He is a former miler who made his 26.2 mile debut on 8 December 2019 in the California Marathon – missing the USA Olympic qualifying time of 2:19:00 with 2:21:59 for 78th overall.

Now he has redefined the athletes staple 'long run' by shuffling round his neighbourhood (course map below) and narrowly missing his target of slower than 20:00 minutes. Perhaps the first question in mind might be, why? Let David explain: ”Why? I think a better question is, why not? The best coaches recommend taking hard days hard and easy days easy and what could be easier than running as slow as possible for one measly mile? Well, it’s trickier than you’d think”.

David got the idea after reading about so many runners trying to run their best in time trials and virtual 'races' and decided to try something different. He introduced one, simple rule; you have to be running the whole time, no walking, no breaks. That's it. He described his approach thus: “Standard thinking dictates that it doesn’t count as running if both feet are on the ground at the same time, but that’s very hard to self-police. An easy heuristic I found is to look at your cadence section in Strava – if you’re in the 150-180 range, you’re running”.

So the standard has been set. David reckons with a second attempt he could easily beat his record and even exceed the 20-minute barrier! That would equate to almost 16 minutes slower than his PB (4:10.38). On his one attempt so far he knew he had blown it when he blazed through halfway in around 9:00! As David says, in opening the challenge: “The gauntlet has been thrown down. I challenge you to beat my 8:34 marathon pace and see just how low we can set the bar for slowest mile limbo. May the slowest runner win”.