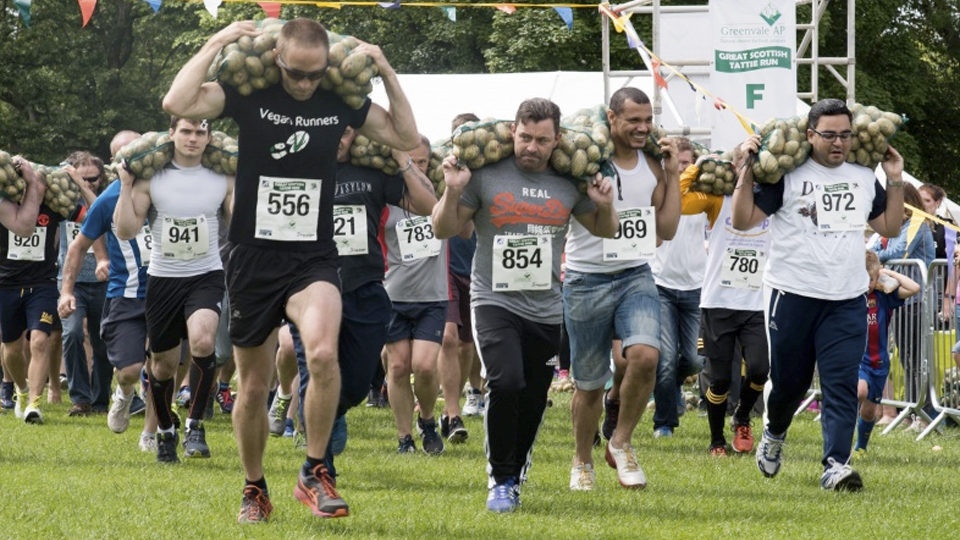 Run For Free At This Perthshire Classic

You don't get much for free these days, but head to Perth on 13 August and you can enjoy a run, a medal and a bag of tatties without spending a penny! The Great Perthshire Tattie Run will take place in the city's North Inch Park and organisers's are promising it will be a 'day to remember'.

The event comprises of a 1 mile event for men and women as well as a relay event (400m) for teams of four (all, of course, while carrying a bag of tatties on your back!). There is also a children's Tattie Run and Spud & Spoon Race which will delight the juniors in your family.

This year there will also be an additional event with organisers asking runners to come along and represent their clan at The Battle of the Clans. Some history is perhaps required here... in September 1396 a battle was staged between Clan Chatten and Clan Quhele, 30 men were selcted to represent each clan in front of spectators including King Robert III of Scotland. Clan Chatten killed all but one of their opponents at the cost of 19 deaths on their own side and were awarded victory. This battle took place on land that is now North Inch Park in Perth.

Tattie Run organisers commented: "We do not expect you to fight to the death but represent your clan by way of the Great Perthshire Tattie Run. Enter individually or get a Clan team of four together and join the Battle of The Clans Tattie Run."

In 2021 there were over 300 entries which was a record number for the event and the weather was kind except for a stiff breeze which wasn’t helpful for the course organisers had created! Jane Gardner from Edinburgh won the women's race while Mike Houston from Chichester in England did it for the guys. A spokesperson commented: "The little ones spud & spoon race was the fun event of the afternoon. I am sure I spotted a bit of cheating going on, but all in good spirit."