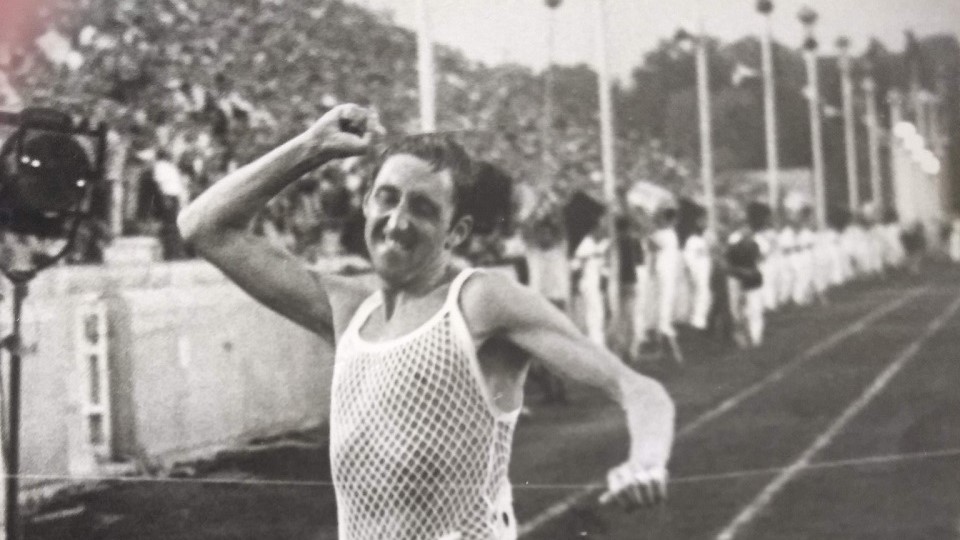 Social media and the athletics press is awash with tributes to one of the best distance runners Britain has produced – perhaps the greatest ever when you take into consideration the impact Ron had on a generation through his innovative use of textile technology to produce functional running gear and his pioneering work on the glycogen bleed-out diet for marathons.

But what about that opening statement from our correspondent – that requires a little more unpacking! Alan takes up the story...

I met Sue in Tunisia on a Ron Hill running and fitness holiday in January 1990. Without us travelling to North Africa from opposite ends of the country to train with Ron, we simply would never have met. Of course, I already knew of his five world records, European and Commonwealth gold medals, three Olympic Games and... Just like most people of that era, I trained in Ron Hill tracksters and raced in his side-split shorts – especially when he brought out the Union Jack ones!

My abiding memory of the great man was how sociable and approachable he was. And what a great sense of humour he had, which was useful when our first 'Run with Ron' training session in Tunisia was a clearly unplanned out and back beach jog that took us through several rivulets, one of which came up to my waist, or Ron's chest, as he was rather small of stature. Ron just laughed, ploughed on and said something about what doesn't kill you makes you stronger!

Since that initial meeting, I have spent many happy times warm-weather training in Cyprus, Spain and Portugal, with Ron as the star guest and myself variously as athlete, coach or group leader and so I got to know the man behind the persona.

One memory from the Benidorm Half Marathon trip organised by our mutual friend David Wright with the much-lamented Sportsresort company was the traditional 'Run to the Cross' for a photo with Ron. The Cross stands at the top of the Sierra Gelada Natural Park at 438m above sea level – from where the run starts. It's a tough climb but the reward was to be a free, framed photo with Ron Hill. This was the pre-digital era and you guessed it – someone forgot to put a film in the camera!

Wherever we went, Ron never missed a beat. Always up for a morning run, despite some enthusiastic socialising the night before as a dedicated imbiber of the amber nectar while dancing with his wife, May, until the wee small hours. Ron could hold an audience spellbound with detailed accounts of his life in running – never having to refer to any notes – which adds even greater poignancy to his later life being affected by Alzheimer's Disease.

Perhaps our favourite memory of Ron Hill came when I was living with Sue in Blackpool and travelling to Stopsley Park, Luton for the 1991 English National Cross Country Championships, together with some members of Wesham Road Runners. Sue had offered to introduce her friends to 'our mate Ron Hill' who we knew was promoting his book Long Hard Road: Nearly to the Top.

After hoots of derision and disbelief, it was a sweet moment as we approached Ron's stand and he looked up and said: “Why, it's my mate Sue from Blackpool”, before giving her a warm embrace. We still have the signed copy of Ron's book!

Thanks for your company and all the memories, Ron. But most of all, thanks for bringing Sue and me together and we'll 'Run to the Cross' in your memory as soon as we are allowed!