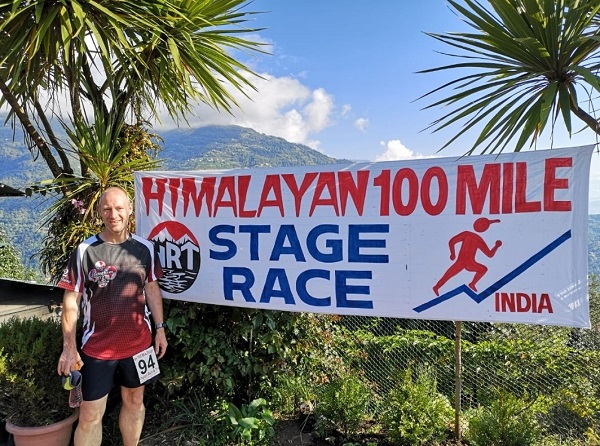 Metropolitan Police Sergeant Paul Hollis (pictured above) has just returned from a successful attempt at the Himalayan 100 Mile Stage Race. In fact, the novice ultra runner put in such rapid foot patrol that he was classified third overall!

runABC South featured Paul's slightly unconventional preparations in this June article and caught up with the Tunbridge Wells Harrier after his exploits. Himalayan 100 Mile Stage Race comprises stages of 24, 20, 26, 13 and 17 miles run on five consecutive days. The Everest Challenge Marathon anchored the entire event on Tuesday, 5 November and the high altitude routes take in spectacular views of four of the world's highest peaks: Everest, Lhotse, Makalu and Kanchenjunga. The total elevation gain was 28,054 feet, about a thousand feet short of climbing Everest itself!

The overall results show a clear win for talented 21-year-old Laxman Singh, from Delhi, part of the hard working Himalayan 100 organisational team. Singh completed his 100 mile itinerary in 16hr49min, including 4:44:00 for the Everest Challenge Marathon. The runners-up were British military man John Wheatley (23:34:00) and Paul Hollis, who just missed 24hrs (24:08:00).

Paul Hollis opened his account with a surprise second on the 24 miles from Maneybhangjang to Sandakphu at 11,815 feet. Paul's verdict on day one: “This was the toughest thing I've ever done. I was shocked, to say the least, to have finished day one in second place, worrying I may have gone off to hard. I also had pole envy, having seen people climb aided with poles and swearing by them”.

Day two was 20 miles out and back from Sandakphu with fantastic views of the peaks all day. Paul's concentration was disturbed by an encounter with a yak on the trail but that did not prevent another second place finish: “At one point I came around a bend to be faced with a yak. There was a wall one side and a sheer drop off a cliff the other, I chose the wall side and was extremely pleased that the yak showed no interest in me whatsoever”.

Everest Challenge Marathon was Paul's 12th marathon in 12 months but this was like no other 26-miler. Paul literally slipped to third place (7:21:00) after falling on the highly technical descent: “The surface was wooden steps, planks of wood over streams, ravines made from water that had run down the mountain and some extremely awkward steps on which I took a tumble, causing a massive bruise on my thigh that has been through nearly as many different colours as the Sandakphu sunrises!”.

Respite came in the form of the tarmac-surfaced fourth day route to Palmajua over a mere half marathon. As Paul recalls: “This surface made it easier to lift your head and take in the scenery while being more confident of your footing”.

The final day's run was on a scenic, rural road finishing with a 10-mile descent to the start point Maneybhangjang, where there was a terrific atmosphere: “Both sides of the road at the finish are lined with the local school children who have come out to cheer everyone home”.

The awards dinner was held at Mirik Lake Resort, concluding a memorable week. Paul Hollis was raising funds for Cardiomyopathy UK charity and further donations can be made to his Virgin Money Giving page here

Paul is grateful to Race Director Mr C.S. Pandey and the India Tourist Board, who declared him an official 'Guest of India'. Paul would also like to thank all the sponsors who have donated to his charity page.