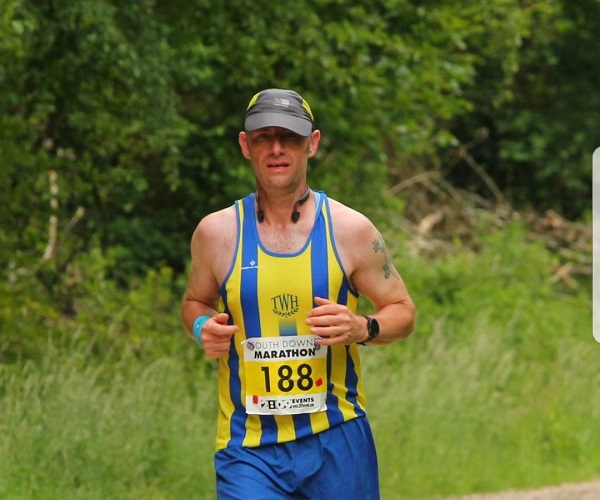 Paul Hollis is a 46-year-old runner with Tunbridge Wells Harriers currently preparing for the running adventure of a lifetime. In November he will take time off from his stressful job as a Met Police Custody Sergeant to take in some 'arresting' sights during the Himalayan 100.

Paul is highly motivated to complete the Himalayan 100 Mile Stage Race to raise vital funds and awareness for Cardiomyopathy UK despite having no ultra-marathon running background. He recently shared his story with runABC South reporter Alan Newman.

“I will treat the Manchester and London Marathons in April as training runs then”. Those were the words that Paul could hardly believe came from his mouth when he told a friend he had just secured a place in what has been described as the 'most scenic race in the world'!

More accurately that should have read the top of the world as four of the world's highest peaks are visible during the stages of 24, 20, 26, 13 and 17 miles over five days. The peaks in question are Mt Everest, Lhotse, Makalu and Kanchenjunga. The Everest Challenge Marathon underpins the entire event on Tuesday, 5 November – so expect some fireworks then!

Paul thanks (or blames) Sarah Russell at Sarah's Runners for introducing him to the concept of the Himilayan 100, having completed it herself in 2014. He helps coach her running group at Tunbridge Wells and in return Sarah has been generous with advice and support. Paul also cites Allan Cheek at The Running Hub in Southborough as crucial for footwear guidance.

Further support has been provided by Race Director and veteran mountaineer Mr Pandey and India Tourist Board, who have declared Paul an official 'Guest of India'. The Police Firearms Officers Association are assisting with publicity, as Paul is a former Royal Protection Officer.

Although Paul only joined TWH recently, he progressed to 20:33 at Bromley parkrun and 3:43:09 at Bournemouth Marathon last year. He has completed 21 marathons to date but working 12-hour days/nights in a highly charged environment is not exactly ideal for training. He supplements his average weekly running mileage of around 30 miles with 35 mile bike rides to Southwark Police Station before starting his night shifts.

This unconventional programme has been boosted with simulated altitude training at The Altitude Centre, Trump Street in London – tough but essential preparation for the rigours ahead. As for those training marathons in April it was a case of mission accomplished. Paul was a 4:30 pacer at Manchester (4:18:27 chip) and ducked under four in London (3:58:19).

Look out for a follow-up interview in runABC South with this self confessed ordinary club runner with an extraordinary ambition.

Paul's charity page is here for any donations.