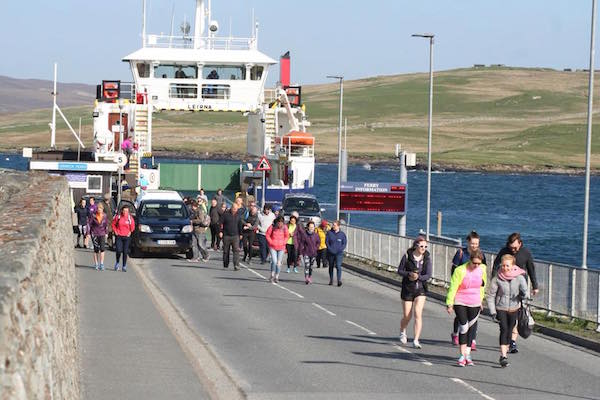 I'm not a big parkrun tourist, compared to some, but I've added a couple of new ones in August. Like all parkruns they were unique. The first, an inaugural, was scenic with lochside (aka lakeside) views and woodlands trails; flat too. That plus a festive first time atmosphere meant 10/10.

The second was scenic with waterside vistas and woodland stretches. That event was a first birthday party so a lively atmosphere too. Unique? You bet – this one wasn't flat. Steep climbs in the woods – this was as much a hill session as a 5k. Marks out of 10? Better make it the full 10.

It's a familiar story – it's rare for a parkrun to be mundane. Everyone I've visited has a quality of its own. I can't really remember the course at Liverpool Princes parkrun but I do recollect run director Eamonn Brady's stand-up routine – you couldn't run for laughing. Overall score - 10.

It was a different story at Crissy Field where you gawped in wonder at the Golden Gate Bridge as you ran alongside the bay in San Francisco (10). There was also a bit of gawping at Wormwood Scrubs – a smashing run all on grass – at the establishment overlooking the course. Good post-event chat there too (another 10).

I spotted that someone had been complaining about Bedford parkrun, not enough support apparently. That wasn't my experience in a heatwave last summer. Lovely venue, flat course, friendly marshals; I liked their bandstand too. Marks? Call it a 10.

Back nearer home in Scotland I love the event which they bill as 'running the whale' and its near neighbour Drumchapel, assessed as one of the toughest three or four in the UK. At the summit of the fiercest peak, a marshal simulates pulling you to the top on a rope. Priceless. My assessment of those events – a couple of 10s.

Scotland's biggest parkrun is Edinburgh, run on flat ground at Cramond foreshore with the mighty Forth for company. I noticed recently someone describing it as dull. What's that saying? If you're tired of Paris, you're tired of life. Great fast route, PB guaranteed. Unless there's a wind! Yes, it's a 10.

Wish list parkruns? Bushy has to be on it. And a South African parkrun – one that gets 2,000 on the start line. Think about the tokens!

Shetland too for Britain's most northerly parkrun at Bressay, where you bond with the other participants on the ferry across to the start. And Jamaica Pond on Boston Marathon weekend looks special. These all must be 10s.

The first parkrun I completed was in Glasgow at Pollok Park. It was set up by a club mate Richard Leyton, who had been to Bushy and was impressed. He explained the concept. His audience was unimpressed. Same course every time? Every week? A Saturday morning? Run by volunteers? Never going to happen Richard.