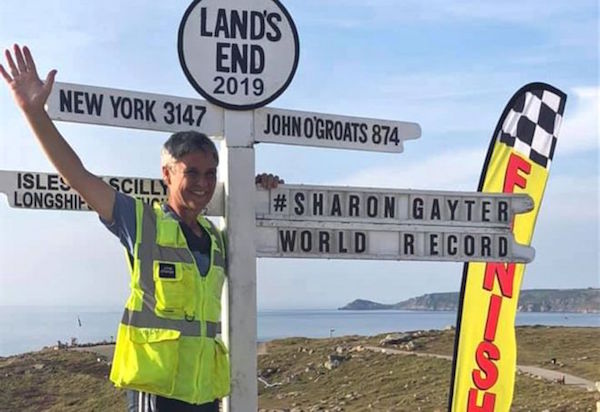 Why Run It? Because it's there!

This month ultra-running legend Sharon Gayter added another monumental achievement to her list of international honours as she broke the women’s record for running from John O’Groats to Land’s End.

The 55-year-old Middlesbrough woman reached the signpost at the Cornish outpost on 2 August after setting off from John O’Groats 12 days, 11 hours and 6 minutes prior.

It broke the previous best by a just over four and a half hours. Gayter’s feat comes from a long line of tradition of running endurance challenges, that do not have the profile enjoyed by Olympic track and field events, but possess a cult kudos cherished by the ultra-running community.

Their philosophy shares much with that articulated by revered mountaineer George Mallory, who when asked, "Why did you want to climb Mount Everest?" came back with the immortal retort: "Because it's there."

Ultra-running achievements share the same pure ambition of human endurance, tackling both man-made and natural routes across the planet. Perhaps the greatest of recent times was Devon’s Kevin Carr who broke the record for circumnavigating the globe in 621 days, completing his run in April 2015.

Another notable record is Braam Malherbe running the length of the Great Wall of China in 98 days. The South African’s achievement translated to running a marathon a day to complete the undulating 4200km length.

The record for running coast to coast in the USA is by American Pete Kostelnick. In October 2016, he completed the 3100 mile run from San Francisco to New York in 42 days, six hours and 30 minutes.

Each achievement shows incredible courage, bravery and sheer guts. But they also reveal something about each runner’s imagination too. As runners, we don’t have to confine ourselves to 5k, 10k, half marathon and such. Why not choose a route from city to city or the length of a county?

Why wait for event organisers? Just in the UK alone we are blessed with iconic coastlines, moorlands, mountains and routes to be conquered. We can run our distance and set our own records. Why? Because they are there.