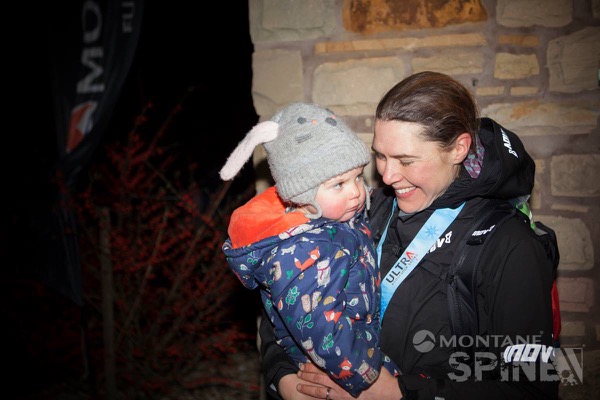 Jasmin Paris has become the first ever female winner of one of the UK’s most gruelling endurance events, the Montane Spine Race. Paris’ performance is all the more remarkable considering she smashed the course record by 12 hours, and, while completing the 268 mile ultra across the Pennine Way, found time to express breast milk for her baby daughter, Rowan.

Considered the most testing National Trail in Britain, the Pennine Way crosses beautiful, difficult and challenging terrain and includes the Peak District, Cheviots, Yorkshire Dales and Northumberland National Park - finishing on the Scottish Borders. Run for the first time in January 2012, the event saw just three participants complete the course.

Departing on Sunday (13 January) Paris, an established endurance runner who is based in Edinburgh, was part of a leading pack that included Spain’s Eugeni Roselló Solé and 2016 winner Eoin Keith.

By Tuesday (15 January) and at around 200 miles, Paris had gradually pulled away from Solé before crossing the line on Wednesday just after 7pm. Her final finishing time was clocked at 83 hours 12 minutes and 23 seconds – 12 hours faster than Keith’s previous record set in 2016. To give even more context, it was 26 hours quicker than Carol Morgan’s female record of 109 hours and 54 minutes.

During the course of the four-day challenge, Paris estimated she rested for around seven hours, at which time she had to also organiser her kit, eat, and breastfeed. The sleep deprivation had a very real side-effect, as Paris explains: "It's a completely different race than any race I've ever run before because it's non-stop so you have the whole challenge of when do you sleep, and that becomes very tactical - and then you're sleep deprived.

“When I was on the final section I kept seeing animals appearing out of every rock and kept forgetting what I was doing – hallucinations. Every so often I’d come to with a start. On top of that it’s very cold and I was wearing all of my clothes by the time I finished.”

Asked if she would return as defending champion next year, Paris added: "Right now, it's more of a maybe, but last night it was very much a no."