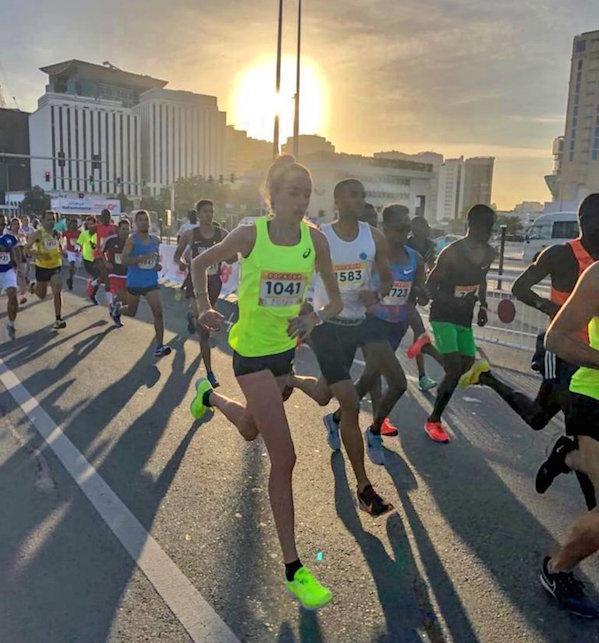 Impressive start to 2019 for Eilish McColgan

While all eyes were on the XC and Great Run action in Stirling this weekend, one of Scotland’s best athletes turned in a lifetime best 10km performance overseas.

Eilish McColgan ran a PB of 31.51 to win the Ooredoo Doha 10k last Friday, in her third time at the event.

Her stellar result – giving her 10th place overall on the day – now means that in terms of Scottish female runners, only her mother Liz has ever clocked a faster 10km time.

But working her way onto the all-time greats list at Doha wasn’t the only good news McColgan’s had to share. The athlete also announced that she has just signed a sponsorship deal with Asics – coincidentally her mother’s sponsor from 1990 until her retirement.

McColgan was clearly pleased with how her January was panning out, tweeting: “First race in new kit. First win. Brand new shiny PB to boot! A pretty good start to 2019. Coming off some of my biggest mileage weeks for a long time too. Must have been the new racing shoes.”

She now has her sights set on March’s European Championships at the Emirates Arena in Glasgow.

As she writes in her most recent blog for her sponsors Lindsays Solicitors: "Knowing that these European championships are in Glasgow has given me extra motivation. It’s fuelled a fire. I'm sure all the other Scottish athletes feel it too. We want to be competing in front of a home crowd.’

"Scotland has been host to some fantastic sporting events over the years and I have no doubt that Glasgow 2019 will be one to remember. We are a proud sporting nation with such a rich sporting history. I'm doing everything I can to be part of it."