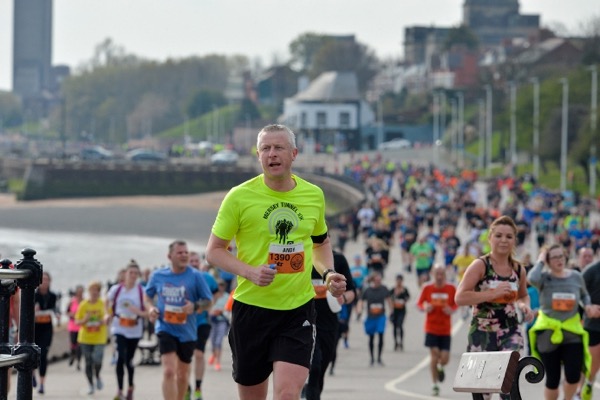 14 years in and the appeal of the Mersey Tunnel 10K just seems to be getting stronger as a sell-out field competed at Sunday’s (14 April) event. The race witnessed another superb performance from Kirsty Longley, who surpassed her 2017 performance to set a course record on her way to victory.

Under the direction of BTR Liverpool since 2006, the Mersey Tunnel 10K is known to be one of the most unique in the sporting calendar, during which runners make their way under the River Mersey and through the Kingsway Tunnel.

Sunday’s 14th annual point-to-point race started in Liverpool city centre and finished at Marine Point in New Brighton. The route took runners from the start line in Blackstock Street, through the Kingsway Tunnel, along Seacombe Promenade, past Fort Perch Rock and the Marine Lake, to the finish line on Ian Fraser Walk at New Brighton.

Podium regular Kirsty Longley added to what has already been a fruitful 2019 with first place in 36:14, a time that was 30 seconds quicker than when she claimed victory two years ago. Longley’s clubmate and 2018 cbampion Helen Sahgal took second in 38:21, with Jenny Carter third in 39:45.

Running clubs from across the North West were well represented, with the largest groups coming from BTR Road Runners, Kirkby Milers, Liverpool Running Club, Penny Lane Striders and Wallasey AC. There was a strong international contingent too with runners hailing from Ireland, Germany, and the United States of America.

BTR race director Alan Rothwell commented: “The BTR Mersey Tunnel 10K is a real highlight of the race calendar given the rare and unique opportunity to run through the Kingsway Tunnel and under the River Mersey. The atmosphere through the tunnel is really fantastic. Seeing people’s big smiles as they head towards the finish line is infectious, well done to everyone who took part.

“Congratulations to Kirsty Longley, who broke her own record to set a new female time for the course. And a big thank you to the volunteer teams from BTR Road Runners; Claire House Children’s Hospice; Everton in the Community; Goodgym Liverpool; Liverpool Running Bugs; North West Cancer Research; and Graham Knowles with Origins Sports Massage – your support is greatly appreciated and make a big difference to the event.”