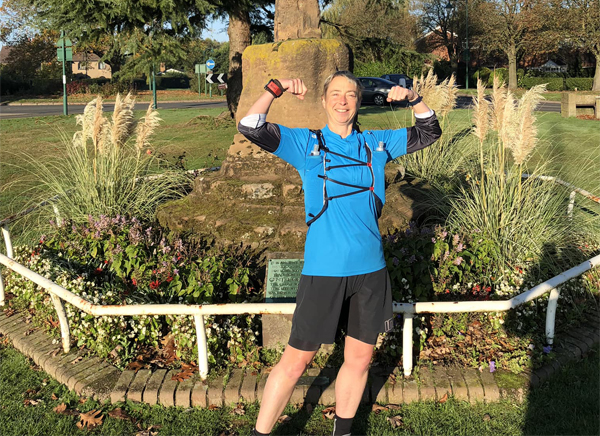 Ahead of her second 24-hour ultra event we focus on runABC correspondent Jane Holt and her colourful running life...

Where did it all begin?
I was born in Bolton so I’m a proud Lancashire lass although I have lived in the North East and on the Wirral and I’m now happily domiciled in rural Staffordshire.

The best of times?
My first degree was in Fine Art and after I graduated I was working as a performance artist exploring the borders between human behaviour and the world of machines. That was a rewarding period but not in a financial sense.

But now you work freelance?
I am a self employed copywriter. Not as much fun as being an artist but there are less worries about the bills!

The worst of times?
In March 2016 when I picked up a knee injury during a race and was out of running action for months. Nightmare!

Where did you pick up the running bug?
I was doing post-grad at Lancaster University (I’m a bit of a perennial student!) when a friend suggested I join her at the local club, Garstang RC. I went along, loved it and never looked back.

Did you get the racing bug as well?
Yes, but not in Lancashire. My parents were living in Staffordshire where I would spend the weekends. I started doing a few of the local races; they have some nice events that are part of the North Staffordshire Road Running Association programme. My Garstang pals called me the ‘long distance racer’.

You’re a ‘clubbable’ woman…
When I settled in Staffordshire I used to go along to the Bourne Sports Saturday morning breakfast run in Stoke. Five or six miles and a free breakfast post-run plus some running chat with the other regulars. A few of those were from Newcastle AC and they invited me to the club. I accepted and grew to love Apedale Country Park and some Tuesdays at the track. And I met up with a few members who were also involved at Newcastle Tri Club, and I joined them too!

Where was your training going?
All roads lead to Wolverhampton and the city’s 2013 marathon. With the help of Newcastle AC buddy Charles Larsson I completed the 26.2 miles and managed to duck under the four-hour mark.

Did the post-marathon aches and pains curb your enthusiasm?
No! Quite the opposite - it gave me a taste for long distance running and I started to look at potential ultras.

What happened next?
I did a second marathon, Chester, then graduated to the 38-mile Millennium Way Ultra. I was pretty chuffed when I stopped my watch on 8 hours 10 minutes on race day. Well, I say race but most of us think about ultras more in terms of completion rather than competition.

Forwards and further…
Not immediately. I sustained a serious knee injury in March 2016 which required rest followed by four months rehab. I returned to running in July 2016 which is when I signed up with coach Gary House of Run Strong and have remained injury-free since then. That's two and a half years and during that time I have run further (and on occasion faster) than before. My weekly mileage has increased as has the training volume and with no ill effects.

What keeps Jane Holt going…
Obstinacy and a nice bit of salmon.

…And what makes her laugh?
I have to confess a fondness for old Carry On films and classic British sitcoms like Are You Being Served.

Strictly ultra for Jane then?
Not at all. I like the occasional parkrun. And I love fancy dress. I’ve raced as a pirate, a turkey and quite a few other things. Performance art meets running so to speak!

Where are you off to now?
For my sins I've entered Escape to Meriden, a 24-hour event with a twist. You have 24 hours to get as far away as possible from the race start in Meriden (Warwickshire). Wish me luck!