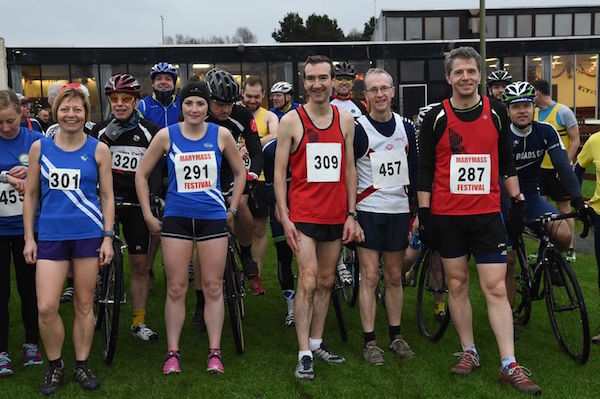 Two wheels triumph over two legs at Irvine this year

The annual contest to settle the argument – at least for 12 months – about whether runners are faster than cyclists was held on Sunday (15 December). But even with the 76-strong field being two-thirds runners, the results weren’t entirely in our favour.

After last year’s decisive win over the cyclists – who had won four of the five previous editions of the five-mile race – runners seemed to be once again on the back foot.

This year, cyclists made up six of the top ten finishers at the Irving Running Club’s 61st ‘Harriers versus Cyclists’ event, and even more tellingly, five of the top six. But all was not lost for the runners, whom organisers say generally benefit from muddier conditions like last year’s.

But there was much better news for runners in the women’s division of the race, where competitors of the two-legged kind nabbed the top three spots. First lady home was Lucinda Beresford of Westerlands CCC (33.13). She was followed closely by Natalie Stevenson of Fusion Triathlon Club(33.38). Katrine Kelly of Troon Tortoises was third lady home (35.18).

Image: an earlier edition of the event, which has been held on the last Sunday before Christmas since 1969