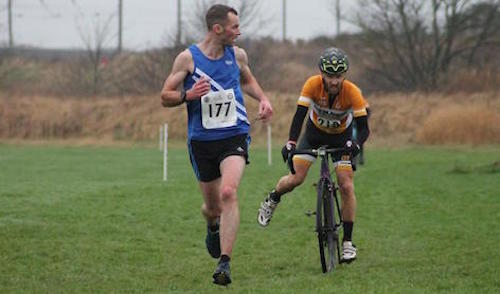 Runners and cyclists may have their views about who’s faster, but one Ayrshire race has put that friendly rivalry to the test for decades.

‘The Cyclists vs The Harriers’ race, started by Irvine YMCA Harriers and Fullarton Wheelers CC, has been held every Sunday before Christmas since 1959. This year’s event will be held on Sunday, 16 December.

The 60th running of the event, now organised by Irving Running Club, will pit cyclists against runners on a five-mile course on soft ground, starting and finishing at Irvine Sports Club.

The route follows paths around the club and the town, as well as a cross-country section over Irvine Moor. The course also contains lots of obstacles to make the challenge as fair as possible.

Entry is just £5, but all entrants are asked to get into the festive spirit by also bringing a small, wrapped present worth about £3 for the prize table. After the race, all competitors will get a chance to choose from the prizes brought. The order in which finishers will be called to choose a gift is based on a formula that takes into account their finishing position and entry category, and is designed to give competitors of all abilities the chance to choose early.

In terms of settling the question of whether two legs or two wheels are faster, things haven’t really gone the runners’ way. Over the past five years, two wheels have got the better of two legs, with cyclists taking the trophy home four times.

Last year’s event was won by Brian Yates (Carrick Cycling); the last win by a runner was 2015, when Del Young (Garscube Harriers) came home in a time of 27.52 – more than 30 seconds ahead of the cyclist who took second.

Entries are strictly limited to 100 and can only be made on the day. Registration starts at the Irvine Sports Club Marress, Waterside Street, Irvine, at 11am. The race itself starts at 1pm.