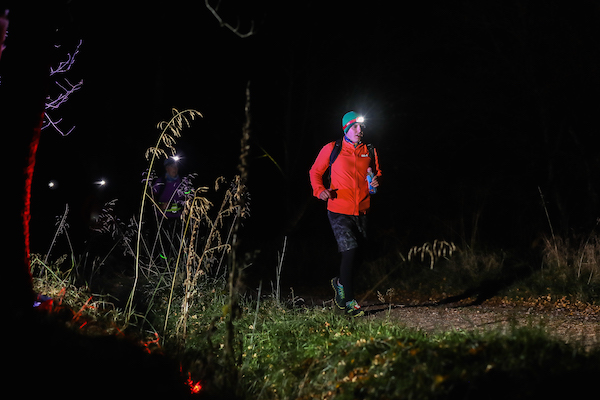 One thousand Illuminators light up Deeside

Around 1000 runners and walkers lit up the trails around Glen Tanar estate on Saturday, when the Illuminator Night Trail Race led them deep into the forests and moorland for the fifth year in a row.

In addition to the ‘classic’ 15-mile distance, this year’s event offered participants a choice of 15k and 8k options for the first time. All three distances passed the colourful lightzone in the forest near the Bridge o’Ess, where marshals had hot juice, bananas and flapjacks on hand to refuel everyone for the final climb up Craigendinnie Hill.

Just after the top, and a few miles from the finish, the event’s charity partner the Braemar Mountain Rescue Team stationed their piper – who played for hours in the cold to encourage everyone to push to the top. His tunes were more than just welcome. As one of the runners reported after finishing: “The best part of the event was seeing the piper, just as exhaustion started to kick in when we were tackling the final hill!”

With clear skies and low but not frosty temperatures, the mid-autumn evening weather was kind to the participants. Many of the runners and walkers commented on the unusual spectacle of seeing a moving string of head torches snaking along the trail, accompanied by blazing stars overhead. One said: “I loved the moment when you reach the open hillside and see this bead of lights stretching out in front and behind you. It’s an amazing sight!”

She said: “It was quite a sight to see the lights of the front runners ahead of me after the first long climb. They didn’t just seem like they were in a different league to me, but in a different race entirely! It was sometimes hard to tell what were headtorches and what were stars.

“No matter how much experience you have of running trails, or running in the dark, running trails you’re not familiar with in the dark is a whole different ball game. It’s oddly both unsettling and liberating to not really know where you’re going or when the hill you’re puffing up will end.

She added: “Every race I run, I learn more. And with this event, I’ve learnt that when they say to bring a spare headtorch or batteries, you should probably bring a third – or a small hand torch – so you can see what you’re doing with that second one when things go wrong.”

“I’m very grateful for the help of the chap who stopped to help me around mile 10 when my head torch conked out and I was making a meal of changing my batteries in the dark. I felt very guilty for interrupting his run, but you really did get the feeling everyone taking part respected the challenge and had each other’s backs. In the end, karma sorted things out, and I helped someone else in the same situation a few miles later.”

Thanks to the dry evening, the winning times for this year’s edition of the 15-mile race were very fast. Metro Aberdeen’s Virginie Barrand set a new women’s course record with a stunning 1.55.56 run.

Her partner, Deeside’s Robbie Simpson, clocked an incredible 1.34.56 for the overall victory. “I’m not used to racing at this time of night, so I’m pleased with that,” he told runABC Scotland online.

With the French event that was to be his ultra running debut cancelled due to bad weather earlier this month, Simpson said he now hoped to take part in November’s North Face 50 miler in California.

Next year will see a different format for the Illuminator. Race director Richard Lawes said: “It’s great to work in partnership with the Braemar Mountain Rescue Team for the past five years, and we’re looking forward to developing next year’s new format for the event with them, and with the feedback our fantastic participants have given us.”