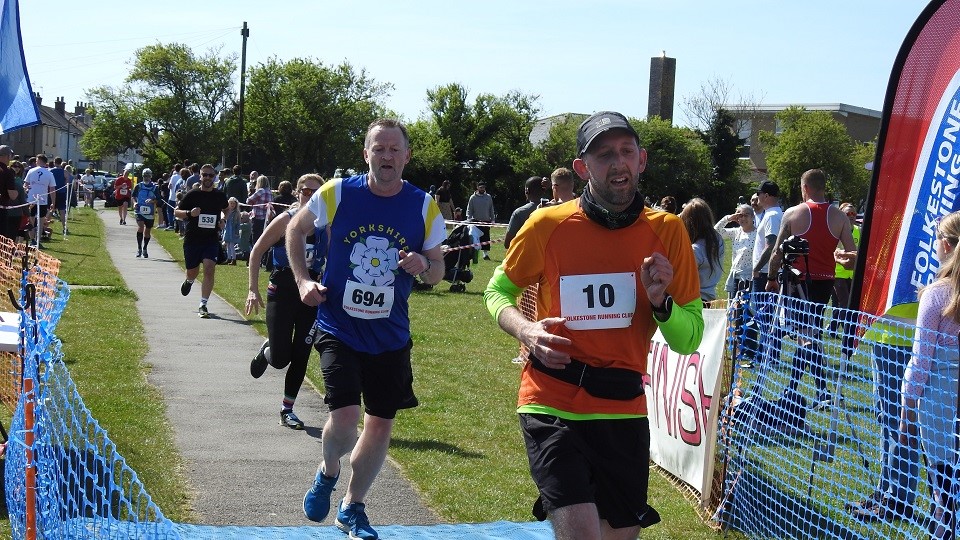 A Tale of Two Tens

Ten miles. That happy place midway between everyone's metric favourite (10K) and the even more popular half marathon distance. Now almost exclusively the province of traditional running clubs with enough history to recall the days when '10' meant miles not kilometres!

Two fine examples of the genre took place on Good Friday (15 April) and we compare them in this joint race report by runABC South correspondent Alan Newman – whose first-ever road race was the Maidenhead Easter 10 (68 minutes and almost last, since you ask) on a scorching Good Friday in 1970-something. Alan also ran the 2012 Folkestone 10 in 67:41, so he is well placed to draw some conclusions.

Maidenhead Easter 10 is the senior of the two races. This year saw the 67th event on a fast, flat course that only has 70 metres of ascent throughout. The race has been held every year apart from 2001 (foot and mouth disease) and 2020/21 (COVID-19). Celebrity marshals have included former Prime Minister Theresa May and the race is organised by Maidenhead Athletic Club founded in 1884.

Folkestone 10 joined the calendar in 1984 and is promoted by Folkestone Running Club. The 37th race (also missing two years due to the pandemic) was held on the predominantly flat, fast promenade between Hythe and Folkestone (back in Alan's day it went the other way).

As Maidenhead is the older sibling and as it started half an hour earlier (9:30am) we'll give the Berkshire veteran first place in this report. There were 765 finishers in warm conditions at 2:29:04. The winners were Michael Waddington (Ware Joggers, 52:24) and W40 Niki Densley (Camberley & District, 63:32) as 33 athletes beat the hour.

So, in similar conditions, it seems that Folkestone was faster at the sharp end but Maidenhead had the greater depth and more finishers overall. Both women's winners were W40 master athletes – a sign of the times?

Did you run either race? Have you run both? Alan's verdict is Folkestone for the sea views and perhaps a painful memory of that first attempt around 50 years ago but the truth is we love them both!