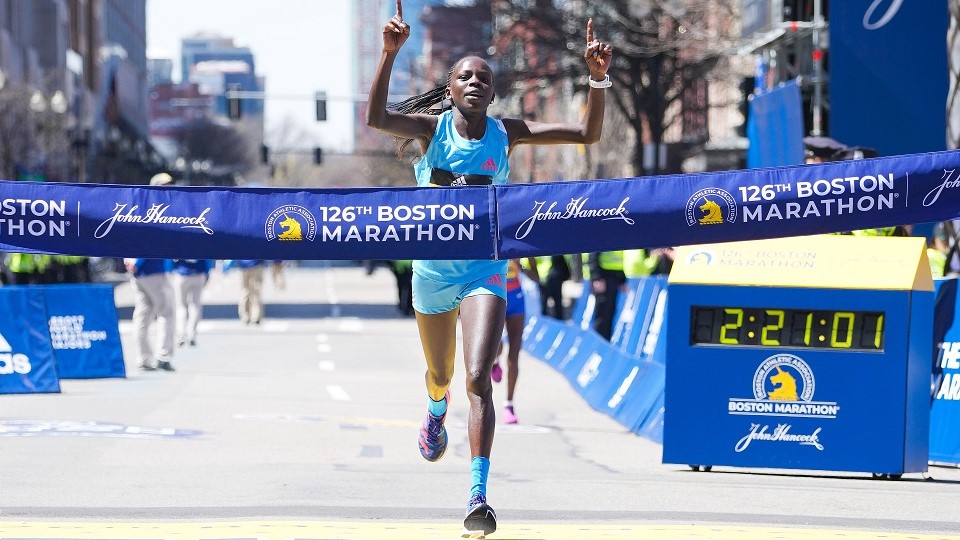 The Boston Marathon is steeped in history. The debut race on 19th April 1897 saw just 15 athletes complete a 24.5-mile course in a race that was inspired by the success of the first Olympic marathon in Athens in 1896. The inaugural champion was John "JJ" McDermott in 2:55:10.

Traditionally held on Patriots Day, Boston is the oldest annual city marathon in the world and it had been held continuously, through two world wars and the Great Depression, until Covid-19 forced the cancellation of the 2020 race and postponement to October of the 2021 event.

This year witnessed the 50th anniversary of the Boston Marathon women’s division and there was a thrilling battle down Boylston Street to celebrate. Olympic champion Peres Jepchirchir (Kenya, 2:21:01) had traded places with Ethiopia's Ababel Yeshaneh (2:21:05), with the lead changing hands eight times in the final mile, before sprinting to a narrow victory.

Asked if this was the most hard-fought victory of her career, Jepchirchir nodded: “I can say that this was a difficult race for me. I came to realize Boston is Boston. It’s a tough course.”

This was Jepchirchir's Boston debut and she becomes the first woman to win Olympic gold, plus New York and Boston – a fitting tribute to Nina Kuscsik’s first official women’s victory in 1972. Kuscsik's win was made possible by the "Pioneer Era" of unofficial runners, known as bandits, like Bobbi Gibb in 1966 and Kathrine Switzer in 1967, who famously was very nearly shoved off the course by the irate race director Jock Semple!

Third place was claimed by Kenya's Mary Ngugi (2:21:32) in a PB by almost four minutes. “We do the same work,” Ngugi said. “The roads don’t care. We’ve still got the same hills.” As it has since first paying the winners in 1986, the Boston Athletic Association awarded equal first prizes to the men’s and women’s winners – $150,000 each this year.

In contrast, the men's race resulted in a clear win for Kenya’s Evans Chebet (2:06:51) who pulled away with about four miles to go to gain 30 seconds over his countryman Lawrence Cherono (2:07:21). A Kenyan clean sweep was assured by defending champion Benson Kipruto (2:07:27) in third.

A total of 25,314 athletes started in Hopkinton bound for Boston, with participants from 120 countries and all 50 U.S. states aiming to earn their coveted unicorn medals. Many spectators waved blue and yellow flags in support of the few dozen Ukrainian runners competing. Any Ukrainians unable to make it to Boston were offered a deferral or refund.