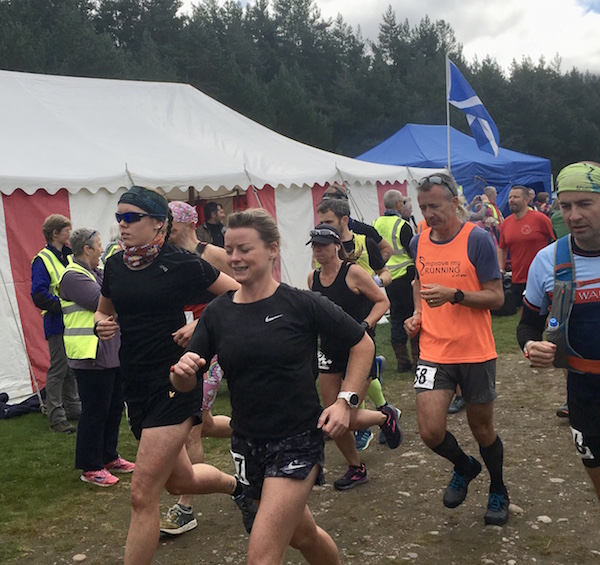 Giving it more at Glenmore 24

The format is simple, but effective: runners must complete as many of the four-mile laps around Glenmore Forest as they can over 24 hours, or 12 hours if they choose the shorter version of the challenge.

runABC’s Christine caught up with Roger Peppiette, the Scot she met on the start line of this year’s Boston Marathon, for his take on the event.

Peppiette, who lives in North Berwick, signed up for the 12-hour version of the race – a challenge that would see him running twice as long as he had ever done before.

And his verdict? “It was quite an adventure! I will say right away that it was one that I thoroughly enjoyed, although there were a few ups and downs of course. There is definitely nervousness in knowing that you are about to run for twice the amount of time that you have ever gone before!

“I started off at a decent pace, but it was only a few hours in before I was beset with stomach cramps. That was a bit tough to manage, but a few hours of careful pacing and I managed to get it back together without any major trauma. I actually felt pretty strong for the last few hours. I was well prepped by Matt Holland (ImproveMyRunning.com), who had been coaching me for the last few weeks on how to build up some better leg strength and endurance.”

Reflecting after the finish, Peppiette had nothing but praise for Glenmore 24. “The most fascinating thing about this event is that it manages to be both a competitive race and a social event. I met a lot of great people along the way, and filled the time with hours of chat about all sorts of things. It's a bit like going to the pub, but without the booze, and with the choice of chatting to anyone, as long as they are going at the same pace as you.”

He particularly liked Glenmore 24’s loop format, and how well it works for support crews. “I had Andy, one of my sons, with me. He was invaluable physical and mental support, waiting patiently at our campervan every 40–45 minutes, ready to supply drinks, food and encouragement.

“He did go AWOL a couple of times, though, when he had wandered off to look for a shop to buy more post-race beers, and found himself a nice warm pub instead. But I thoroughly approved of this behaviour!”

In the end, Peppiette achieved his goal of running more than 100km. He completed 16 laps in just under 11.5 hours: a total of 105km and a performance good enough to finish fourth male and fifth overall.

But in Peppiette’s view, the performance of the day came from Christine Caldwell in the 24-hour event.

“She ran the whole thing at pretty much the same steady pace, with the briefest of stops. I think she must have been half way down the field after the first hour, and as much as 1.5 hours behind the leader by midnight. As he and everyone else slowed up in the cold conditions overnight, she never did. She was picking people off all night.

“By mid-morning she was comfortably in 2nd place and eating into the lead with every lap. She got to within a couple of miles of him by the finish (over 125 miles in total). He was pretty much out on his feet, but Christine looked like she could have kept on running and smiling for a few hours more. Amazing!”

When runABC's Christine wondered if Glenmore 24 was the start of a new career in ultra-running for her friend, he laughed: “Would I do this again? Absolutely. Would I move up to the 24-hour event? Absolutely not!”

She may well bump into him on the start line of another big-city marathon yet.