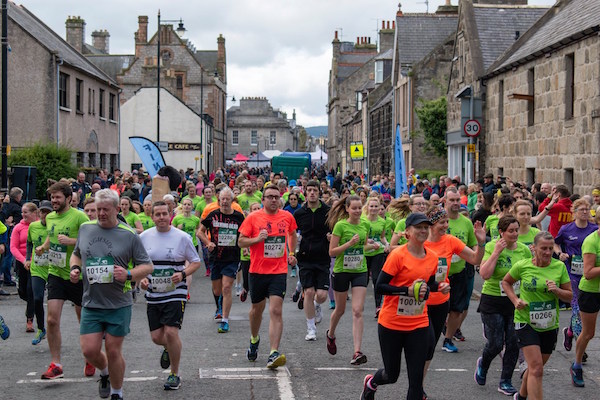 Organisers of last Saturday’s ‘Room to Run’ festival in Huntly were delighted with how the day went – especially after ‘taking the event up a notch’ with the addition of a challenging trail half marathon.

Held during the Huntly Hairst, the town’s annual food and farming festival, Room to Run’s 5k, 10k and now half marathon races start and finish in front of a 3000-strong crowd in the town square.

Race organiser Bruce Murray told runABC Scotland online: "The race is now seen as the major annual event in the town – and the town was absolutely buzzing!

“Combined with the Huntly Hairst, Room to Run draws in a whole range of visitors – not just the runners. It has a hugely positive impact on local businesses, accommodation and trade. Nearly all our food vendors sold out by the end of the day, with one telling us he sold more in the three hours of the run than during the Royal Highland Show and Turriff Show combined!’

Now in its fifth year and with 1000 runners spread across the races, ‘Room to Run’ started out as a 5k, organised in just a matter of weeks so the runners on the local C25k programme could have something concrete to aim for.

That 5k was a ‘phenomenal success’ – so much so that Huntly-based shortbread bakers Dean’s asked the organisers if they could also put together a 10k. Over the last few years, the runners themselves asked the organisers to add a trail half marathon; what they got was what Murray calls a ‘killer route but with stunning views’.

As Murray explained: “As there aren’t many trail-based races in North-East Scotland, we thought we'd create a tough one that people would talk about! It's a fantastic trail route around the Bin Forest with spectacular views over the town as runners catch their breath between the punishing hill climbs.

“So far, pretty much all the feedback on the sold-out half has been extremely positive: one runner called it ‘brutal’, with ‘hills around every corner’ and the ‘hardest race he’d ever done’ … but he has also promised to be back for more next year.”

If there was a glitch in an otherwise superbly run festival it was only that organisers’ desire to reduce waste through the use of water pods didn’t quite go to plan: the sole UK distributor of the pods wasn’t able to supply them due to high demand. But organisers thought on their feet, and replaced bottled water with biodegradable cups.

And what’s on the cards for next year? “We don't have plans to grow much bigger in terms of numbers as it starts to put strain on the infrastructure of the town and becomes too big and impersonal, but we have a couple of options to improve and grow gently over the coming years.

“We’re looking at adding a specific canicross race for those who wish to run with their dogs. We've always welcomed dogs, but canicross is a rapidly growing activity in Aberdeenshire, and we're keen to offer an event to those that perhaps don't have race outlets for their groups.

“The planning for 2020 starts in a couple of weeks – but now we’ll take a little time to catch our breath – like many of the Room to Run runners.”