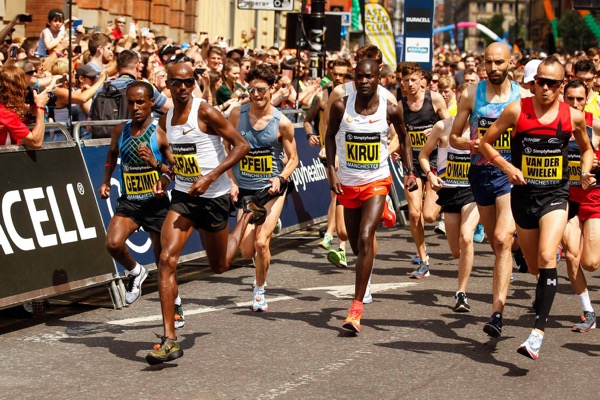 Mo Farah’s first appearance at the Great Manchester Run in over a decade resulted in a relatively comfortable victory ahead of Ugandan Moses Kipsiro. Tirunesh Dibaba, meanwhile, proved that she really is the queen of Manchester with another formidable performance to claim her fifth title.

Prior to Sunday’s (20 May) event, a minute’s silence was respectfully honoured in tribute to the 22 people who died in last year’s Manchester bombing. The 2017 race took place just a matter of days after the attack.

In warm conditions, Farah found himself with Moses Kipsiro and Abel Kirui for company for the majority of the race. Kipsiro, particularly, stuck with Farah until the last, with the Brit’s trademark kick allowing him to pull away in 28:27, marginally ahead of the determined Ugandan. Kenya’s Kirui took third in 28:52.

The anticipated duel between Tirunesh Dibaba and Joyciline Jepkosgei didn’t materialise with the Ethiopian putting in a measured performance. Dibaba always looked the likely winner despite her rival's early lead and she joined Haile Gebreselassie in claiming five Manchester titles with victory in 31:08. Jepkosgei took second in 31:57 and Saina third in 32:25.

Gemma Steel was the fastest Brit in the women’s competition, bagging 7th in 33:29, while Lily Partridge managed to compose herself after a fall at the start to take 9th position in 34:28. Earlier in the day, Craig Pillsbury secured first in the accompanying half marathon event in 73:58, with Carly Needham of Rochdale Harriers top in the female competition in 79:30.

Entries for the 2019 race are now open, with organisers offering an early bird 20% discount.