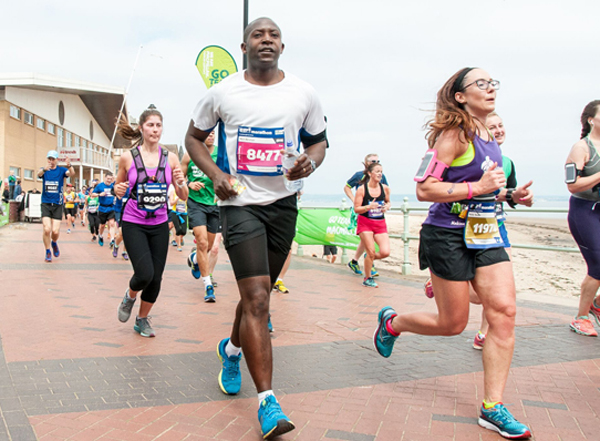 Luca Aiming To Make A Name For Himself At EMF

There are just four days (five for marathon and half marathon entrants) until Edinburgh Marathon Festival 2018 and runners across Scotland and beyond are putting the finishing touches to their big event preparations.

One man - Luca Basso - who bills himself as a 'fun runner' is planning to do a 'hairy' and take part in all four senior events. Luca will tow the line at Saturday's 10k and 5k before an early start on Sunday (8.00am) at the half marathon, followed by the main event at 10.00am.

Luca, who lists cooking among his interests, should be able to put those skills to good use this weeks as he loads sufficient carbs to fuel him on his 50-mile odyssey. He will also be motivated by his determination to raise funds and profile for SAMH, the Scottish mental health charity, as he runs in memory of his brother who committed suicide at a young age.

Luca will be one of 35,000 who will take to the streets of Edinburgh and East Lothian for this year's event. Marathoners will enjoy a new route in 2018 with a start on Potterrow at Edinburgh University before heading passed the statue of Greyfriars Bobby and down the Mound to the Scottish National Gallery. A detour through Princes Street Gardens follows with views to the castle and the Scott Monument.

A short section on the Royal Mile takes runners to Holyrood - palace, gardens, parliament and great views up to Arthur’s Seat. It will be quite a sight for spectators as thousands of runners make their way across Holyrood Park before heading down to Portobello and the coast. The race now takes on a different character as runners settle into a journey along the East Lothian coastline with stunning views across the Firth of Forth to Fife.

Crowds lining the route should look out for Shona McIntosh of Hunters Bog Trotters who stopped her watch on 2:45:09 at the ASICS Greater Manchester Marathon back in April. Shona looks set to be challenged by Tracy Millmore of Birtley AC who ran 2:46:09 at the Plusnet Yorkshire Marathon last autumn.

Among the men Carl Hardman is one to watch after running 2:19:35 in Berlin last September as are James Bellward, an RAF Athletics runner who clocked a 2:30 in Brighton last month, and Phil Martin of Peterborough AC who grabbed a personal best in London last year.

Each of the EMF runners have their own reasons for taking part including the Broughton Primary School contingent with over 100 pupils, teachers and parents involved in this year’s event. The pupils will be in good shape on race day after regular runs to train for their events ranging from the Kids’ Kilometre to the Junior 5K.

Edinburgh Marathon Festival is Scotland's largest mass participation running event. With nine races on offer, there is something for everyone from the seasoned runner to the charity fundraiser and beginners. The fun kicks off on Saturday 26 May at Holyrood Park with a 10K, 5K and four junior races.