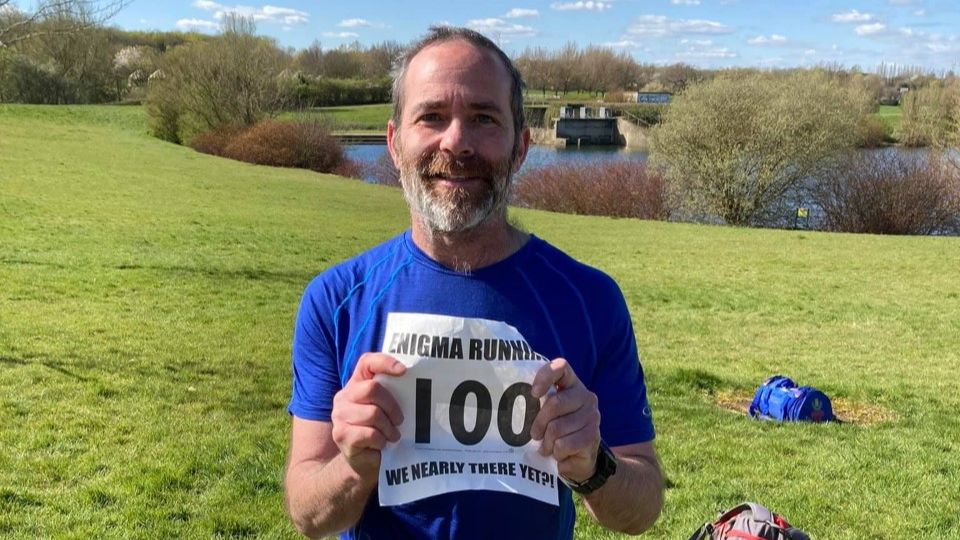 Enigmatic return for followers of the Fox

There were no puzzles to solve; just miles to run at Milton Keynes

Enigma. It's a cipher device developed in the early 20th century to protect commercial, diplomatic or military communication. It's also a 1995 novel by Robert Harris and a 2001 espionage thriller film that put Bletchley Park, Buckinghamshire firmly on the map.

Enigma Running – now that's a whole different kettle of fish, although there are some echoes of those mysterious goings-on during the height of the Second World War. Enigma Running was started by ultra-marathoner David “Foxy” Bayley – he of the airplane-style finish, with his arms flung wide while performing a victory wing waggle!

David started running in 2005 having accidentally entered New York Marathon, as you do. Five years and 100 marathons later he was so hooked that he wanted to put something back into the sport he had discovered. In April 2010, he staged a small trail race from Caldecotte Lake in Milton Keynes, along the Grand Union Canal to Leighton Buzzard and back. He dubbed this first event 'The Bletchley Enigma' and Enigma Running was born.

Always a trailblazer, the strapline 'Run with the Fox' was soon added and the Enigma Quadzilla, with its four marathons in four days format, became the holy grail of Enigma Running events; 300 of which had been held by the 2018 Enigma Fireworks weekend.

And so we come to Easter weekend 2021 and Enigma Running is still leading the pack with the first long-distance events to be staged over a multi-day period in this post-lockdown era. The 'Run with the Fox' Easter Series at Milton Keynes was based at Lakeside Grove and the programme comprised two full marathons on Good Friday (2 April); a half marathon on Saturday and another full marathon on Easter Sunday.

The marathons were run in the reverse direction on Monday for variety and hanging strong for a further 8K was an option for a 50K time – taken by Claire Carlin who took 4:51:19 for an unusual birthday celebration. The fastest marathon times over the three races were achieved by Michael Garnett (3:02:18) on Friday and Jennifer Sangster (3:19:54) on Monday. And mentions in dispatches too for Kelvin Gower who completed the 50K on Friday in 5:05:35 and Saturday's half marathon winners Jason Fielding (1:17:41) and Rachel Edwards (1:37:31).

But the biggest smile of the weekend was sported by Chris McFaul (pictured above) who ran 5:01:57 on Friday and 5:10:59 on Monday to gain entry to the hallowed 100 Marathon club!