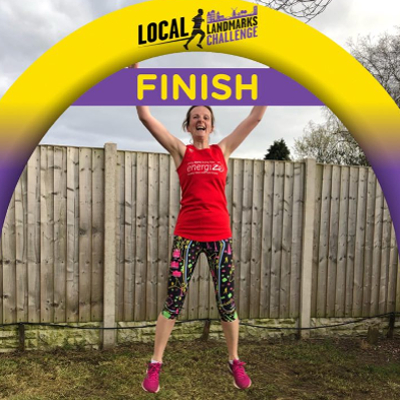 Deborah Meredith was ready to go for her London Landmarks Half Marathon but coronavirus and lockdown put paid to that. She didn’t want to disappoint her charity Energize and those who had sponsored her so ran the distance - in her garden!

Telford-based Deborah had trained long and hard for London Landmarks Half Marathon on Sunday 29 March and was physically and mentally ready for this event. This would have been her first ever trip to London.

The worsening situation with coronavirus resulted in the event being cancelled but organisers launched a virtual event instead called the Local Landmarks Half Marathon 2020 Challenge. This solo virtual challenge required the participant to run the distance around landmarks in their local area and if they were fundraising, could continue to do so.

It seemed like the perfect solution but as a single parent to three children Deborah was unable to leave the house, removing that option and the chance to raise funds for Energize. However, Deborah was unswerving in her desire to help her charity and set out to run 13.1 miles around her back garden.

She stayed with the original date (29 March) and blue skies and sunshine made an attractive backdrop as she ticked off the miles whilst her family cheered her on. Deborah posted live updates during the run and showed pictures of London landmarks, e.g. Big Ben before finishing with a flourish.

Deborah Meredith ran 250 laps of her garden to reach the 13 mile target.

This is not something she is planning on repeating as in her own words: “Looking back it was a completely bonkers idea and mentally, it nearly broke me.” However Deborah took pride in her achievement. Deservedly so!