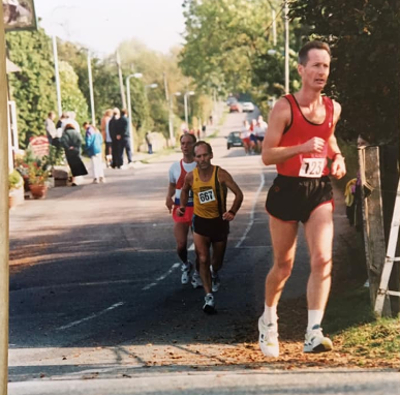 A rare gem: the Eccleshall 15

We continue on our trip down National Staffordshire Road Running Association (NSRRA} memory lane and a look at another popular race - the Eccleshall 15. This is an unusual distance and one that you rarely see these days but useful if preparing for a marathon.

This was one of several races organised by George Kay along with the Bathpool 5, Stone 10K, Tittensor 10 and Stafford 20 that were top quality, well supported affairs. These and many others accounted for the strength and depth of running in North Staffordshire.

Eccleshall is a historical market town situated in the picturesque Sow Valley within the borough of Stafford. The nearest towns are Stone (6 miles), Stafford (7 miles) and Newport, Shropshire (9 miles).

The Eccleshall 15 made its debut in 1980. The start was outside the old Fire Station on the High Street where the runners set off towards Stone. A right turn into Stafford Street, right along Horsefair and up Newport Road to Whitley Heath. They continued for three miles towards Great Bridgeford before turning left through Ellenhall to Four Lane Ends and the Stafford Road. Left turn off the Stafford Road into Green Lane and the end of the big lap.

A left turn onto the Newport Road then left again to Ellenhall but when they reached Green Lane for the second time they crossed the Newport Road into Cross Butts. The finish was at Eccleshall Church of England School on Shaw’s Lane.

In 1998 the distance was reduced to 10.5 miles and the start moved to Linacre Road.

Ken Rushton asked NSRRA members how many female finishers in the 1980 race? The answer was two.

How times have changed since then.