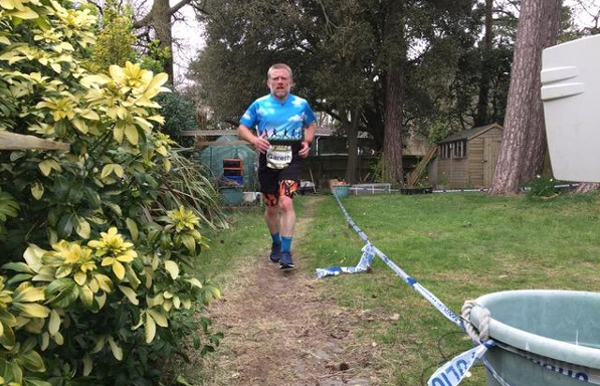 On Saturday 28 March Gareth Allen set himself a challenge – running a marathon in his back garden. The Southampton man reached that target then battled on for six hours to complete 30 miles for his two chosen charities.

The national lockdown has restricted people to one outdoor session per day. Races, for many runners the impetus behind their training, have come to a standstill and without that challenge motivation can suffer. But runners are an enterprising lot...

Gareth Allen's stroy begins with him embarking upon a year-long fundraising quest to complete 12,100 mile events in less than 12 months. This fundraiser is for the benefit of two charities - Great Oaks School and the Hurricanes Rugby Club, helping and supporting children with learning difficulties.

This experienced endurance runner was geared up to run the Belfast to Dublin ultramarathon on 27 March but this was cancelled due to the outbreak. And so Gavin's garden marathon was born...

He marked off a grassy area in his garden, set up an aid station and pinned on his race number before setting off to run lap after lap. And, to create a race atmosphere whilst having some fun, he livestreamed his event on Facebook where over 330,000 people watched and posted messages of support. In his words: “This was a way of keeping the social side of running going even in these challenging times.”

The goal was marathon distance or 1066 laps but if his GoFundMe page reached its target (£1,066) he would continue until the six-hour mark.

Donations can be made at his GoFundMe page.