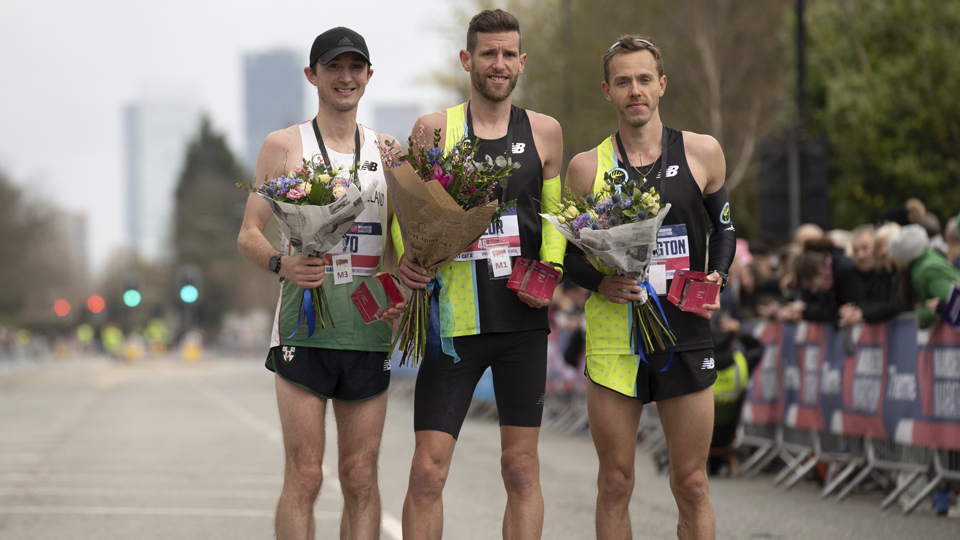 Manchester Marathon produced some Commonwealth qualifying times at the weekend…

On Sunday (3 April) over 150 of the best of British endurance athletes competed in the UK’s largest spring marathon, the Therme Manchester Marathon, for a coveted place with Team England in the 2022 Commonwealth Games in Birmingham.

The 26.2 mile course through Greater Manchester, known for its flat and fast route, allowed England Athletics to set a tight qualification standard with qualifying times of 2:14 for male athletes and 2:34 for female athletes.

Competition was tight for the position of first finisher with Jonny Mellor taking first place with a time of 2:10:46. He was closely followed by Ross Millington and Kevin Seaward with respective times of 2:11:38 and 2:11:54. Joining her compatriots as first female finisher was Becky Briggs, who finished with a record-breaking time of 2:29:04, closely followed by Naomi Mitchell (2:30:54) and Georgina Schwiening (2:31:37).

Nick Rusling of event organisers Human Race said: “2022 is shaping up to be a fantastic summer of sport, with the Commonwealth Games taking place right here in the UK in Birmingham. For us at Therme Manchester Marathon, to be asked to host the England marathon trial, alongside the British Athletics European Athletics Championships qualifiers, is a testament to how big our marathon event has become.

"The atmosphere on the route today was electric and we could see how hard these athletes have trained to achieve one of these treasured places for Team England.”

Tom Craggs, England Athletics Road Running Manager, added: “We are delighted to see such tight competition today, with the athletes pushing themselves to place within the top three in order to join Team England this year for the Commonwealth Games 2022.

"2022 is an incredibly exciting year for home nations athletes with three major championships taking place, and we were delighted to have worked with the team at Therme Manchester Marathon to support athletes to have the best possible experience at the England Commonwealth Games and British Athletics European Championship trials.”

The elite athletes were joined by over 24,000 runners at the start line, all of whom were running to achieve their own goal of completing the 26.2 mile challenge. The Therme Manchester Marathon’s continued growth has seen it become the second largest marathon in the UK and the fourth largest marathon in Europe, challenging heavyweights like London, Paris and Berlin marathons.

With a rich history dating back to 1908, Manchester Marathon is hugely popular due to its fast, flat course, and the unrivalled supportive and welcoming Mancunian atmosphere. In exciting news it has just been announced that adidas has signed up to a new long-term partnership beginning with the 2023 event. The agreement will see the sportswear giant become title partner for the 2023 adidas Manchester Marathon which is scheduled for Sunday 16 April.

Chris Walsh of adidas North Europe said: “We are delighted to announce our title sponsorship of the Manchester Marathon. We are passionate about providing access to sport and enabling more people to enjoy running. At adidas, we believe that through sport we have the power to change lives and we look forward to celebrating the hard work and dedication of every runner as they take on race day in April 2023.”

Places in next year’s event are available to secure now. To find out more about how to run or volunteer at the next event, visit the event website.