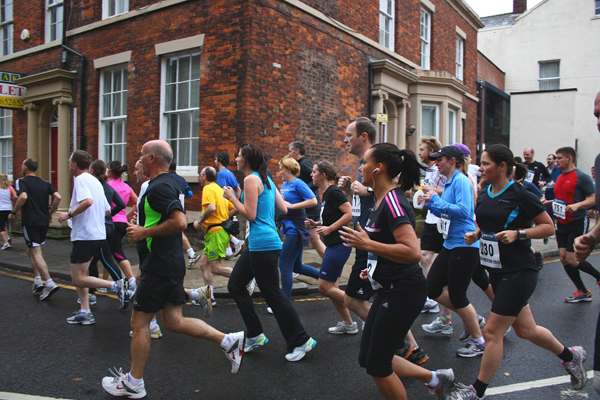 There's just over five weeks until the relaunched City of Preston 10K but already excitement is mounting ahead of the big day (Sunday 30 September). Former GB international and Preston resident Chris Livesey has entered and will be hoping to challenge for a podium place.

But Chris is just as excited about being part of the office team. The Salford Harrier told runABC North: "We've assembled a team of 11 from my company PAR and we're all excited about running in the local race." Chris is a guy with a top running pedigree and in his early 20s he won a sports scholarship to the USA however injury crushed his dreams of a career as a middle-distance runner.

After 10 years out of the sport Chris returned to competition and has been relishing his second chance taking part in events from the National relays to his local parkrun. Chris reckons that one of the key attractions of the City of Preston 10K is its scenic riverside route which features Avenham Park and the other green spaces alongside the Ribble.

Also looking ahead to the 10K with excitement is first-timer Sultana Ahmed. Sultana was inspired by her young son who wanted her to run with him at a school event. That was the prompt for her to get started. Soon she was heading out regularly with a friend from the local mosque determined to get fit enough to complete a 10K.

Experienced race organiser Sports Tours International has assembled a powerful alliance to make sure the relaunched event, previously the Run Preston 10K, becomes a top North West race. JD Sports, who have a large gym in Preston City Centre, are the title sponsors while the JD Foundation, Heartbeat, Babybeat and the NSPCC are the official charities. Local radio station Beat Radio are the event's media partners and are planning a major on-site presence led by breakfast DJ Rob Charles on race day.

The City Council is supporting the race programme, which includes a Family Run, and mayor Trevor Hart will be along on the day as chief cheerleader.

Sports Tours International's chief executive Chris Bird has also announced that all profits from the race will go to the recently established Running Bee foundation and allocated to community projects in Preston which provide opportunities for young people to get involved in sport.

Chris reckons that City of Preston 10K 2018 will attract 2,000 entries and he, and the rest of the team at Sports Tours, have been pleased to see entries from as far afield as Italy and Holland.

You can sign up for City of Preston 10K and the Family Fun Run at the Sports Tours International website.