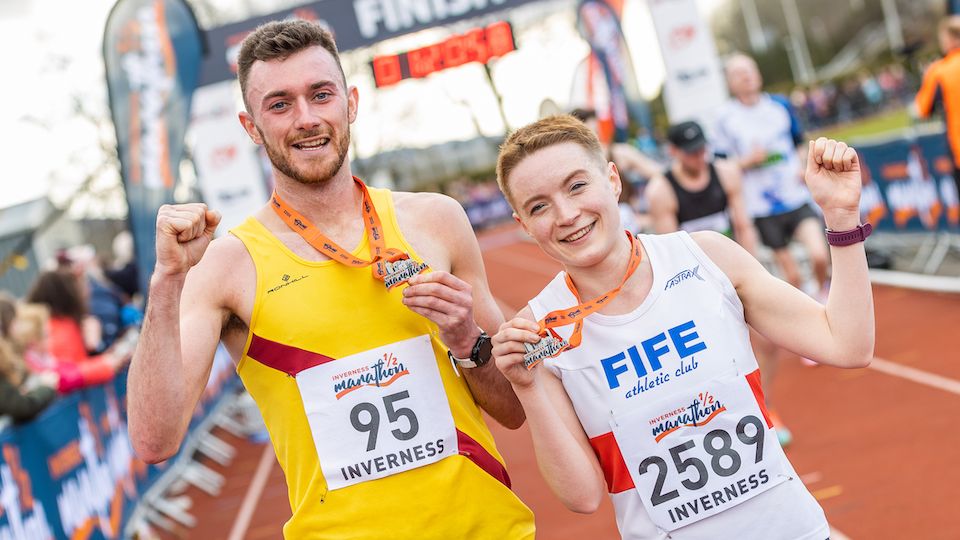 Chalmers and Simpson triumph at Inverness Half

Sean Chalmers of Inverness Harriers and Annabel Simpson of Fife Athletic Club have won the 2022 Inverness Half Marathon, completing the course in 1.06.16 and 1.13.40 respectively.

The pair were the first to cross the finish line against a record 3400 sign-ups to the event, which made its return for the first time since March 2020.

Chalmers, an Aberdeen-based P.E. teacher, had the home athletics fans cheering to the rafters as he became the first member of Inverness Harriers to lift the men’s title since the race was first held in 1985.

But he was made to battle every inch of the way for his success. It was only as the runners approached the final 300m on the track at Queen’s Park stadium that Chalmers was finally able to break clear to take the win from Shettleston’s Peter Avent – who set a personal best time when finishing just three secs behind the Scotland international.

Cambuslang’s Fraser Stewart took third position in 1.06.40 while Moray’s Kenny Wilson finished fourth in 1.06.48 on a day when 14 men completed the course in under 1.10 – making this one of the strongest in-depth turn-outs in the 37-year history of the event.

Lauren Wilson (Edinburgh AC) was runner-up in 1.18.27 while Jen Wetton (Central AC) maintained her fine record of consistency at Inverness by finishing third in 1.18.38.

The 1000-entrant strong Inverness 5K, which took place alongside the Half Marathon, was won by second-year medical student Luke Nelson of University of Aberdeen Athletics Club and Caitlyn Heggie of Ross County Athletics Club, in times of 17.15 and 17.30 respectively.

Malcolm Sutherland, Director of Inverness Half Marathon and 5K, said: "A massive congratulations to our winners, Sean Chalmers and Annabel Simpson for the Half Marathon and Luke Nelson and Caitlyn Heggie for the 5K.

"With the last Inverness Half Marathon and 5K taking place just a couple of weeks before the first Covid-19 lockdown, this year's event was extra special. We were delighted to see record numbers of entrants signing up and taking on the Half Marathon and 5K, and the buzz throughout the day was amazing.

"Runners came from across the UK and our volunteers and supporters ensured they were given a warm Highland welcome back. We'd like to thank everyone involved in making the event such a success, especially all of the runners, many of whom were raising funds for charity. We hope to see you all again next year."

The official charities for the 2022 event were SAMH (Scottish Association for Mental Health), Alzheimer Scotland, The Archie Foundation, Highland Hospice and Mikeysline.

Winners of the Half Marathon were presented with their medals by Depute Provost of Inverness, Bet McAllister, who is also a former Inverness Harriers coach.

The Depute Provost said: "What a fantastic day! Well done to everyone who took part in the Inverness Half Marathon and 5K, especially to the winners.

"As a former Inverness Harriers coach, it always brings me such joy seeing people take part in events like this and achieving their goals. Not only is this event great for participants, but for Inverness and the wider area, as well as the charities that are supported. Congratulations to everyone involved."

Full results from the Inverness Half Marathon are available via runABC Scotland's race listing page.