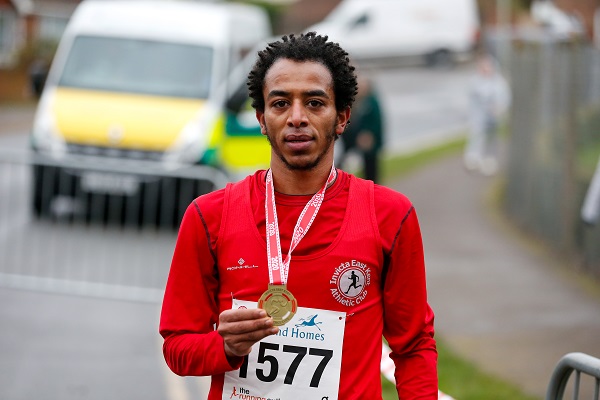 Super six for Tsegay at Canterbury 10

Race director Glenn Mousley had predicted a sixth successive victory for the host club's Abel Tsegay and a sell-out 1,500 entries for the Pentland Homes Canterbury 10 on Sunday (26 January). For his next trick he will reveal this weekend's winning lottery numbers!

With an impressive 1,446 finishers in just under 2:45:00 the new sponsors, Pentland Homes, and charity partners Pilgrims Hospices were among those who were delighted with the continuing support for this Kent classic, despite its traditional date the day after the tough South of England Cross Country Championships.

Many tungsten tough types double both events but that was not the case for Abel Tsegay (Invicta East Kent) who was making his first competitive appearance of 2020. Dressed to impress on a chilly morning, the Eritrean (pictured above) was fresh for this contest and it showed as he soon constructed a winning lead, eventually growing to more than three minutes. Operating at 5:15/mile pace, Tsegay returned to Canterbury Christ Church University Sports Centre in 52:29 – the second fastest of his super six victories after his PB 51:13 win in 2018.

The race has supported local charity the Pilgrims Hospices for many years and a large team ran for the worthy cause and the race organisers also made a significant cash donation.