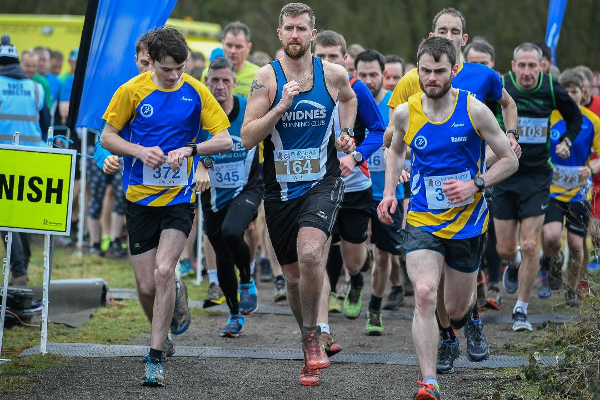 Host club Warrington RC swept the board at the first race in their 5 Mile series as mud and water made it sticky going. Two climbs up the ‘steep bump’ added to Saturday’s (25 January) run and fun.

There are four, 5-mile races in this All Seasons series and the first took place on Saturday at Colliers Moss near Warrington. This was the ‘Winter’ version and whilst there wasn’t any snow or ice to slow things down the alternative – mud – wasn’t any easier to deal with.

However, it was a well-organised event from Warrington RC who have a reputation as a friendly club and this was much in evidence as their marshals went out of their way to encourage all participants. Examples of this include a marshal with a whistle at 5.2K and another with a bell, all of which kept runners going as they squelched through the mud, waded through the water and scaled the hill twice.

Things hotted up near the end with a sprint finish between Warrington RC’s Callan Rowland and his teammate Daniel Schofield. Rowland pipped Schofield to the post, winning in 30:21 with another teammate, Edwin Drost third.

Sharon Raynes was the winning female in 38:39. Jude Wall of Manchester Triathlon Club was second in 39:16 and Anna Parsons of Northwich RC third in 39:45.

There were 368 finishers. They received a winter medal and a goody bag that was worthy of its own award.

The event was voted a winner mainly due to the course, marshals, medal and goody bag. The mud... maybe less so.

The second race in the series is on 28 March.