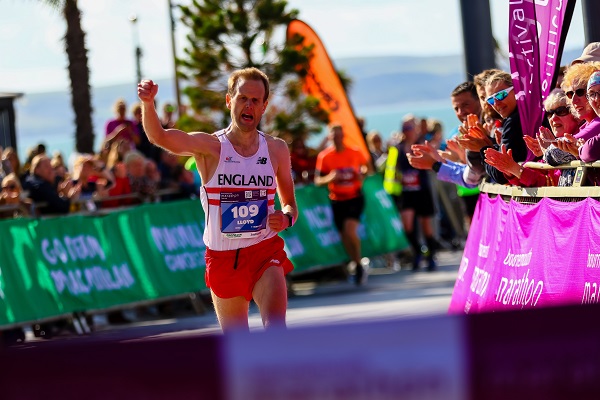 Bournemouth Marathon Festival Half Marathon kicked off Sunday's (6 October) action in the Dorset resort, positioned at the eastern end of the 96-mile long World Heritage Jurassic Coast. The half was due off at 8:00am followed by the full marathon at 10:00am – a timetable cunningly designed to tempt some endurance enthusiasts/masochists to tackle both races!

Unbeknown to runners there was a major police incident taking place in nearby Boscombe Chine Gardens, just yards off the course. Sadly, a deceased male had been found and a police investigation cordon was in place, although subsequently a police spokesman stated there were no suspicious circumstances. Swift communication between police and organisers GSi Events aided by social media enabled the event to proceed.

James Hoad (Thames Hare & Hounds) set a blistering pace from the start in Kings Park and on the spectacular seafront, with views at 6 miles of Hengistbury Head midway between Poole Harbour and Hurst Spit. The diversion of running on Boscombe Pier, first constructed in 1856 and the dramatic finish at Bournemouth Pier did little to distract the leader as he finished in 1:09:45. There were excellent place times for runners-up Sean Hogan (Poole Runners, 1:10:43 PB) and the rapidly improving Robert Spencer (Bournemouth, 1:11:06 PB).

Bournemouth Marathon brought the busy programme to a close and could be the final 26.2 mile race held as no marathon is included in the programme for 3-4 October 2020. With 2,131 finishers in 6:48:23, this is one of the best supported marathons in the south of England and if this is the last event it will disappoint many runners.

Full race information for 2020 is available now at the new Run Bournemouth website and runABC South race listing has a link to this year's results here.