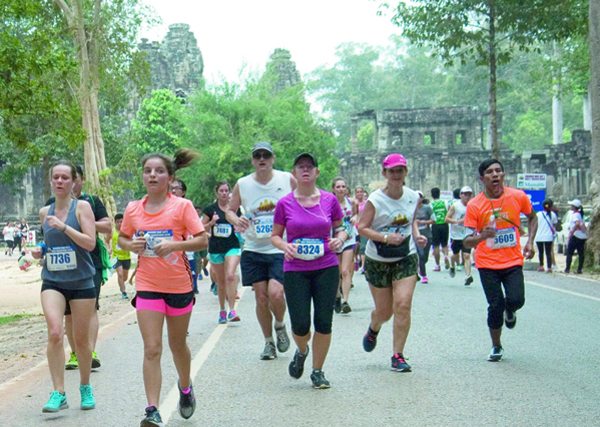 Dramatic running in the ruins at Angkor Wat

The Cool Season?
I arrived in Siem Reap, the town on the outskirts of the Angkor Archeological Park a few days before the race to acclimatise to the humidity and heat. Although it is held in Cambodia’s cool season, temperatures can still reach 87F with over 80% humidity. On the plus side, it meant I wasn’t shivering on the start line!

By the time I arrived at 5am, following a 15 minute moto ride, a covered cart with cushioned bench seats pulled by a motorcycle, the start was buzzing with runners from all over the world; some running the half marathon and others the 10k. Now in its 20th year, the Angkor Wat International Half Marathon attracts up to 10,000 runners from all over the world with its start and finish in front of Angkor Wat.

At The Start
Checking in my bag, I made my way to the starting pen and watched as the rising sun etched the iconic silhouette of Angkor Wat against a reddening sky. Once the sun had risen everyone was keen to get going but if there’s one thing that you have to remain sanguine about in Cambodia, it is that time is a fluid concept. 30 minutes later than the advertised 6am, I crossed the start line.

Regular Stops
The first 8k followed an out and back route along the approach road to the archeological park, tracing the 190m wide moat that surrounds Angkor Wat. At 10k, I began to pass the Cambodian wheelchair racers who had begun the race earlier, which served as a stark reminder of more recent history. Torn apart by the rule of the Khmer Rouge in the 1970s, Cambodia was also heavily land-mined and has over 25,000 amputees, the highest ratio per capita in the world. A proportion of the race profits go to help those affected.

With the sun overhead, everyone was grateful for the shade cast by trees, and for the supporters. Some were tourists cheering friends and family but there were just as many Cambodian children all eager to high five the runners. Water stations were plentiful and I poured as much over my head as I drank.

Facing Up To History
The Angkor Archeological Park is over 400 square kilometres and contains much more than Angkor Wat. The race passed the magnificent entrance to Ta Prohm, four enigmatic faces believed to be of King Jayavarman VII who built the temple. It is a particularly popular site as it was used in the filming of Tomb Raider. I was torn between wanting to explore while it was quiet and the desire to finish the run before it got hotter.

Although the route does not take you into any of the temples, you do get the chance to run under Victory Gate, one of the entrances to the ancient town of Angkor Thom. Not that I felt victorious with 7k to go as I ran towards it down the approach road flanked on either side by carved figurines, thousands of years old, some exhibiting bullet holes as a result of fighting between the Vietnamese and Khmer Rouge.

Echoes Of The Past
Running out of the shade into the open at the Terrace of the Elephants was like running into an oven. The 350m long stone platform features carved elephants and was originally used to view victorious returning armies by the king. It was hard not to feel overwhelmed at the echoes of the many footsteps that had trodden these same roads thousands of years before my own journey.

The final stretch was more difficult as our race merged with the 10k (which had started 30 minutes later) as many participants were walking four or five abreast. Thankfully, the finish was not far off and when I heard the cheering supporters and Angkor Wat came into view, I managed a final sprint to finish in a sweaty heap.

Banana Time
After collecting my medal and a banana, I walked out of the finish area to be offered a beer and fresh coconuts by the many industrious hawkers but I declined both in favour of returning to my hotel and a cool swimming pool.

Most of the runners at the Angkor Wat Half Marathon are expats and tourists so this race doesn’t offer the same experience of meeting runners from different countries like those I’ve done in India and Turkey. But it more than makes up for this in the extraordinary opportunity you get to run through ancient Khmer ruins.

The Angkor International Half Marathon is held in December - details on their Facebook page. 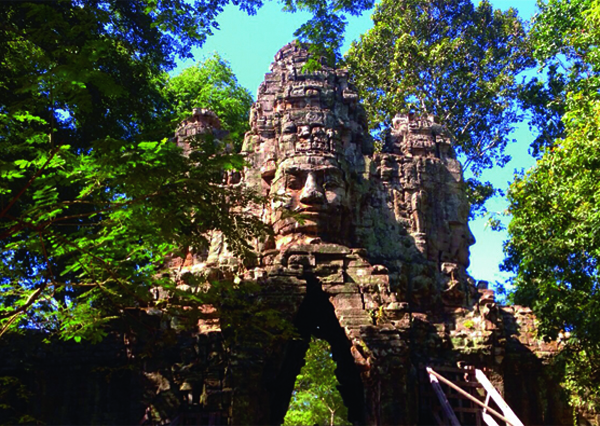