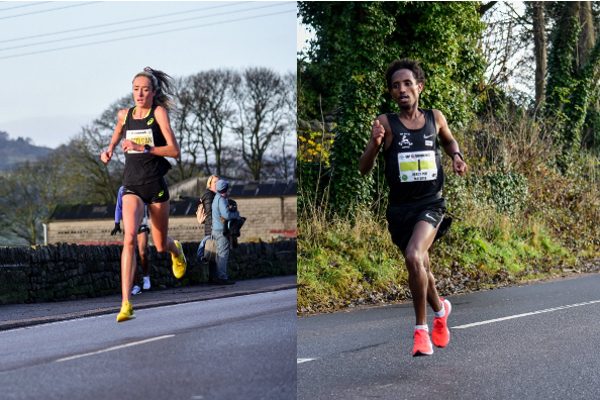 Ahmed & McColgan hit the jackpot at the Percy Pud

The saying 'time is money' came true for Omar Ahmed and Eilish McColgan who broke the existing course records at the Percy Pud 10K on Sunday (1 December). This was the fourth title for McColgan who also posted a PB at South Yorkshire’s most popular 10K.

Organisers Steel City Striders have a winning formula when it comes to this hugely popular race as the 27th Percy Pud went down a treat with 3,000 runners. It has sold out for the last 10 years and this time, places filled up within a couple of hours of going live – a testament to the organisation, fast course and extensive prize list that included £1,000 for new male (29:13) and female (32:23) course records.

The generosity continued with prizes for the second to 10th placed men and second to 7th placed women (plus the ladies have three prizes in the 35 to 39 age group), top three in all age categories and new this year, 75+ man and woman. Every finisher received a Christmas pudding and beanie hat. There were free Christmas puddings as a ‘thank you’ to local residents and businesses whose goodwill the organisers rely upon.

Omar Ahmed of Birchfield Harriers sped away from the start and continued his lightning run to win in 29:00 and a new course record. Andrew Heyes was not far behind him in 29:19 with Phil Sesemann third in 29:39.

The cold weather suited Eilish McColgan who flew around this relatively flat, out and back course through the picturesque Loxley Valley. She won the women’s race in 31:48 – a PB by three seconds and a new course record. Finishing nearly three minutes behind her was Lauren Heyes in 34:30 followed by Phillipa Williams of Sheffield RC in 34:59.

Was the race good for winter PB’s? The answer is a resounding “yes”. Also extra marks to the winner of the women's race who happily posed for numerous selfies with other runners. Nice touch, Eilish!