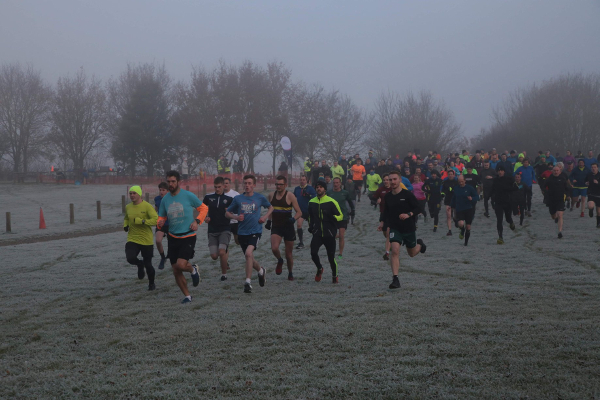 The expression “chill out” took on another meaning for 129 runners and 29 volunteers at the first Brixworth Country parkrun (Saturday 30 November). They braved sub-zero temperatures at this stunning location that included a few climbs to get the blood pumping.

A pale winter sun tried to break through the early morning fog that together with the glistening frost wouldn’t have looked out of place on a Christmas card. Described as 'beautiful by many, Brixworth Country Park is set within rural Northamptonshire and ideal for outdoor activities such as cycling, walking and now, parkrun.

The organisers went for a ‘softly softly’ approach to avoid being swamped and this tactic worked as a small but perfectly formed group of 129 people turned out to christen the new parkrun. There had been a few concerns about the weather following a Met Office forecast but thanks to the efforts of the Country Park rangers and a last minute course inspection, the organisers decided to go ahead.

Some runners wore big bobble hats, gloves and several layers; a few hardy souls opted for a running vest and shorts and the remainder were somewhere in between. They soon warmed up as they completed an out and back course that included majestic views across Pitsford Reservoir with the return leg back through the park.

Matthew Peleszok of Desborough RAPID RC was the first man home in 18:19; Olivia Thompson of Northants Tri Club was the first woman in 22:30.

This is the third new parkrun for Northamptonshire within the last six weeks and attendance figures continue to rise at the other two. Fingers crossed for the same at this latest addition.