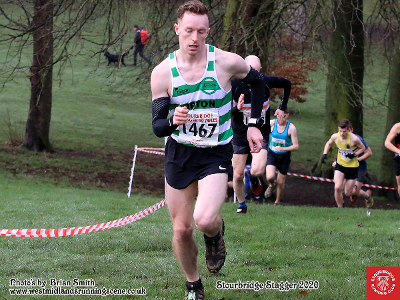 Hill and dale and mud at Stourbridge Stagger

Over 500 runners made a good fist of a hilly, muddy course at Sunday’s (2 February) Stourbridge Stagger. The tricky 10 miles-ish didn’t slow down Adam Soley who went on to win.

This is one of several races organised by Stourbridge RC that is known as a tough event due to the elevation as well as the terrain. As a winter event the weather is always a factor; previous years have seen snow and ice but conditions were milder on Sunday. Rain in the preceding days left the course soggy in places and there was mud as expected.

Participants had the choice of approximately 10 miles or the shorter 7k, both of which were held at Mary Stevens Park in Stourbridge. Off they went at 10.30am along an attractive multi-terrain route consisting of grass, trails and tracks and hills to clamber up followed by descents.

The supportive marshals kept everyone moving particularly the lady at the end whose enthusiasm was infectious. Her vocal encouragement was appreciated by many.

Adam Soley of Tipton Harriers looked strong as he powered his way up the hills and around the challenging course. He swept to victory in 1:03:59 – more than three minutes ahead of Mark Thomas of Black Pear Joggers who was second in 1:07:05. Nick Lewis of BRAT was third in 1:08:00.

Victoria Shaw of Stubbington Green Runners was the winning female in 1:16:11. Marie Matthews of Kenilworth Runners was second in 1:17:36 with Deborah Thomas of Trentham RC third in 1:19:33.

Every finisher took home a monogrammed hand towel as a memento of the event.