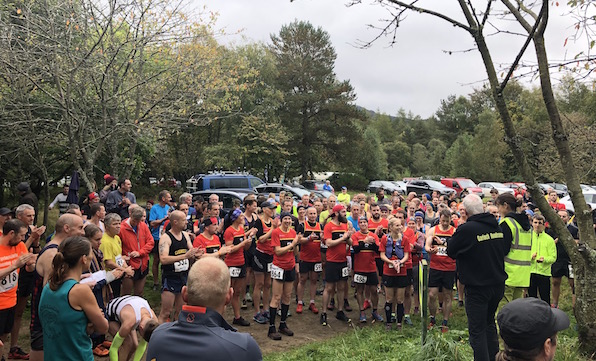 Runners from the past, present and future of hill racing gathered to celebrate the 30th anniversary of the Bennachie Hill Race yesterday (Sunday 29 September).

The event, featuring an 8.2-mile (1500ft) course taking in the major tops of Aberdeenshire’s Bennachie range, has been hosted by the Inverurie-based Garioch Roadrunners since 1989. A shorter version of the event for runners aged 13–17 precedes the senior race.

From his position on the finish line, Sharp regretted he wasn’t taking part. “There’s no running for me now with my arthritis. But when I see guys out running in Dundee, I wish it was me! I still have my old Garioch Roadrunners kit … but it fits a little more snuggly now.”

The 30th anniversary event was won by relative novice to hill racing, Jonathan Buchan (1.02.39). The Fraserburgh RC runner, whose first ever hill race was last month’s Tap O’North, said after his win: “I’ve not really done a lot of hill running, as I’ve mainly focused on 5ks and 10ks. I’ve never felt my legs so full of cramp as I did today. I really had to dig deep. It’s a been a big learning experience for me!”

Sue Taylor, who won the inaugural women’s race, also took part in Sunday’s anniversary event. When asked how her run compared to her win 30 years ago, Taylor, who runs with the Cosmic Hillbashers, said that it was ‘harder, slower, and wetter’ than she remembered it.

Inverurie-born Team GB trail runner, Meryl Cooper, ran the BHR for the first time. After finishing third female, the Dubai-based runner said; “I love this hill, and I’ve always wanted to race it. The timing was perfect as I’m home for a little while before heading back to Dubai next week. I’m really glad I ran today. It was so different … really fast and fun.”

Chair of the Garioch Roadrunners, Gordon Orr, said: “The 30th anniversary Bennachie Hill Race was just as special as we hoped it would be. It was an honour to have the founder, John Sharp, here with us today, and to see so many clubs from near and far represented.”

“Today’s junior winners may well be taking home the prizes in another 30 years … so long may the Bennachie Hill Race continue!”

The Bennachie Hill Race is the second event in the 2019 Aberdeenshire Hill Race series, along with Cairn William and Morven.