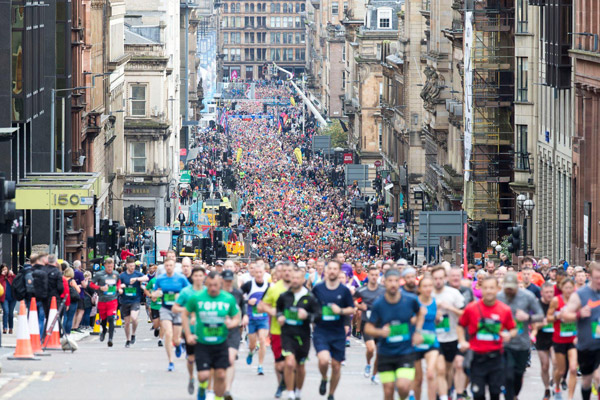 15,000 runners took to the streets of Glasgow yesterday for the 2019 Great Scottish Run. Conditions remained dry despite threatening skies although later finishers in the half marathon might have hoped for a cooling breeze to get them through the final punishing miles.

Spectators around the routes enjoyed great race action at the head of affairs where Ugandan Timothy Torotich and Edith Chelimo of Kenya dominated in the half marathon contests. Torotich was always prominent and when he heard the pipes at 6 miles that propelled him into a decisive lead which he held to the finish line.

The 27-year-old from Uganda broke the tape on 1:01:29 after a bold front running display that impressed the crowds especially in the closing stages. He had a minute to spare over Micah Kogo (1:02:28) who just held off fellow Kenyan Stephen Kiprop (1:02:32). 2018 winner Chris Thompson (1:05:33) may have been disappointed with his 7th place but he didn't show that at the finish - waving happily to onlookers.

Edith Chelimo (1:07:38) was equally impressive in the women's race. Like Torotich she dominated her race finishing nearly two minutes ahead of second-placed Nancy Kiprop (1:09:24) with Askale Merachi (1:09:34) third. Some of Scotland's good club runners kept Chelimo company for sections of the race and their talents were introduced to a broader TV audience.

There were a number of high profile runners including actor Jordan Young of River City and Scot Squad fame. In Scot Squad Young plays a hapless and narcissistic PC who invariably fails to deliver and the actor who ran for Muscular Dystrophy UK had predicted a sub 1:30. No problems this time – Young stopping his watch on 1:26:49.

Thousands of other charity runners plus a big contingent of club and recreational runners enjoyed a course which saw them stream out of the city centre and across the Kingston Bridge before heading west to the parkland sections in Pollok and Bellahouston. They then turned east and crossed back over the Squinty Bridge before a riverside run to the the finish at Glasgow Green.

Earlier in the day a 7,000 strong field had taken part in the 10K test of the big race double header. Max Milarvie of local club Victoria Park AAC won the men's race in 30:50 and GB international and regular visitor to the city Gemma Steel was fastest lady in 35:29.

Caroline Devlin from Irvine had a good day: "Great but tough run. Always a favourite of mine as the people of Glasgow make it and wow belly dancers were fantastic. Well done ladies."