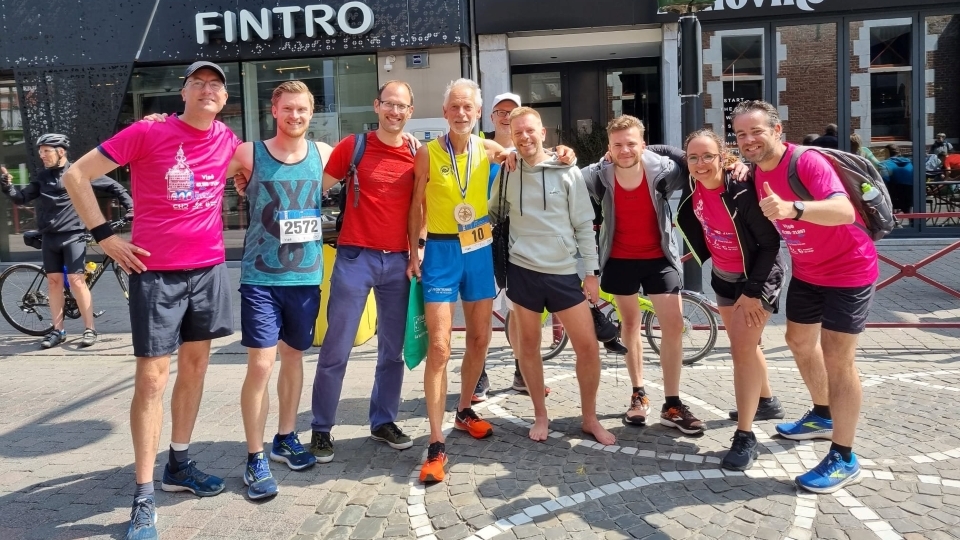 Jo Schoonbroodt, the flying Dutchman from Maastricht, ran an impressive 2:54:19 in the Maasmarathon of Visé in Belgium on Sunday 8 May. Normally, a sub-3-hour marathon would be a pretty run of the mill story but this Jo  (wearing #10 above) is no Joe Jogger – he’s the new M70 world record holder.

Just think about Jo’s pace for a moment. He was travelling at 14.5km/hour; clocking 4:07 for every one of those mind numbing, body bashing 42.195 kilometres. Put another way, he ran eight and a half parkruns in 20:35 – non-stop – and he’s 71 years old! On the World Masters age grading tables, as explained here by runABC coach and writer Alan Newman, his result is worth 96.3% and is equivalent to 2:02:57 when age-adjusted!

As you might expect, Schoonbroot is no stranger to record breaking and this was his 75th sub-3 marathon. In the same race last year, he set a European record (2:56:37) which he subsequently lowered to 2:55:20 in the Rotterdam Marathon. Now he is simply the fastest septuagenarian in history, but it was close call in Belgium.

After steaming through halfway in 1:26:18 on the two-lap course, Schoonbroot was well ahead of schedule for American athlete Gene Dykes’ 2018 world best 2:54:23 on an uncertified Jacksonville course – and Canadian Ed Whitlock’s listed world record (2:54:48) at Toronto in 2004 – but he lost nearly two minutes due to the windy conditions and after suffering cramp in the final 500m.

The first lap was assisted by the presence of half marathon runners but the second lap was more attritional, as Jo explained: “Luckily, we had a large group of half marathoners in the first loop who could protect me from the fresh north-easterly wind. In the second loop I was joined by my running mate Frank Driessen who helped me in the difficult sections against the wind”.

The ramrod-straight ASICS Frontrunner wore blue shorts and a yellow vest in support of Ukraine and pushed through the pain barrier to tidy up the M70 records, with four seconds to spare, before celebrating with friends.

Schoonbroot’s post-race verdict? “That was a bit of a shock but I now know how far I can use my body to push the edge in a marathon”. And for the shoe connoisseurs out there he wore ASICS Metaspeed Sky racers.