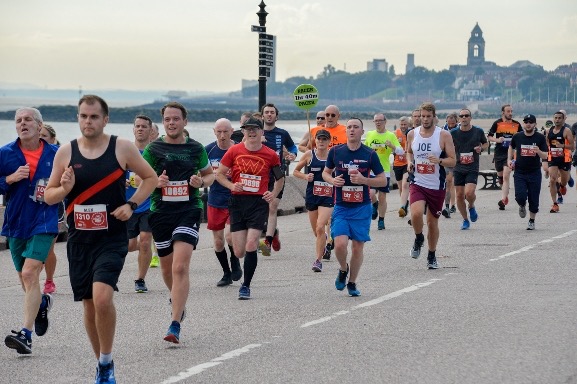 It was a weekend in which Wirral was taken over by a whirlwind of running as 1200 competitors took part in a hat-trick of events organised by BTR Liverpool. This came to a crescendo on Sunday with the Wirral 10K and Wirral Half Marathon, with the 13.1 mile race marking the last stage of the Whistle Stop Tour of WIrral.

The races were officially started by the Mayor of Wirral, Councillor Tony Smith, and his wife and Mayoress, Barbara Smith. They were joined by Everton FC ambassador Graham Stuart, who was representing club charity, Everton in the Community.

The 10K was won by Michael Heyes representing Mersey Tri in a time of 36:13. Colin Walsh from Penny Lane Striders took second place in 37:23 seconds, with James Blake taking third in 37:45. Carmel Edwards took first in the women’s competition in 39:12, with second place going to Elaine Opara (45:09) and third to Natasha Culkin (47:28).

For the Whistle stop tourists, Sunday was the last leg of a journey that had already seen them complete five miles at Arrowe Park on Friday evening (6 September), followed the next morning by eight miles multi-terrain along the beach at Thurstaston, through Thurstaston Country Park and along the Wirral Way.

Jay Walker from Wallasey AC returned to the Whistle Stop Tour Of Wirral for his fifth consecutive year, and is one of a handful of runners who have taken part each year since the race was introduced by BTR in 2015. In 2015 Jay recorded 13th place, moving up to 7th place in 2016, third place in 2017, and taking the top honours last year. This time he recorded his fastest combined time of all three races in 2:37:55 seconds – beating last year’s winning time by four minutes 52 seconds.

Second place went to Dave Lemon from Buckley Runners in 2:49:32 seconds. Third place was taken for the second consecutive year by Steven Longmore in 2:50:36 – Steven has also taken part every year. First place female finisher was Zoe Richardson in a time of 3:7:51 seconds, followed by Sophie Weston in 3:25:44, with third place taken by Alex Buckley from Chorlton Runners in 3:28:53.

BTR race director Alan Rothwell commented: “Congratulations to all our runners who each took on their own personal race challenge in the Wirral 10K, Wirral Half Marathon or Whistle Stop Tour Of Wirral. We’re delighted that Wirral’s Mayor and Mayoress and Everton FC's Graham Stuart joined us to start the race, adding a real sense of occasion.

“A big thank you must also go to our volunteer teams from Claire House Children’s Hospice and Everton in the Community, as well as many runners from across the Merseyside running community who helped out across the weekend.”

Next up in the BTR portfolio is the world-famous Liverpool Santa Dash on Sunday 1 December 2019 – the UK’s biggest festive 5K fun run. Further info is available here.