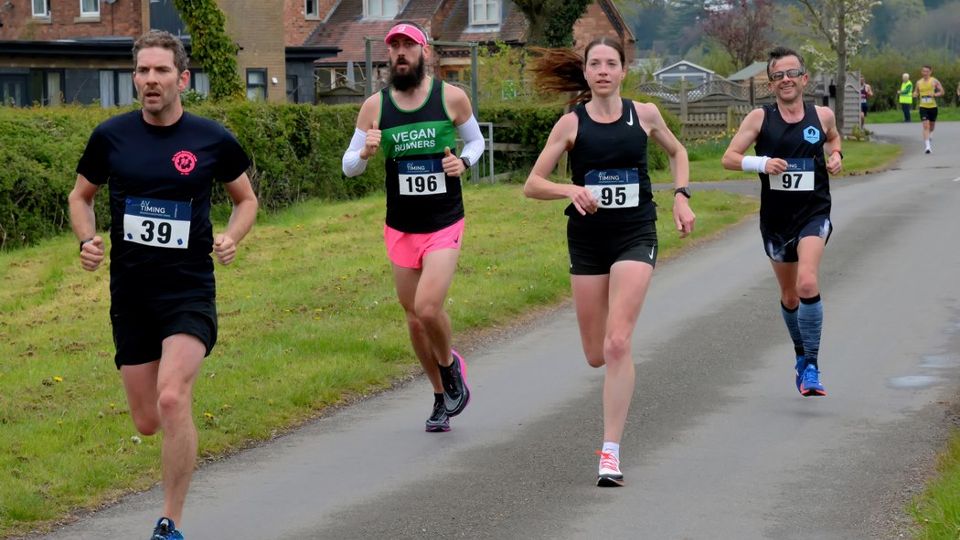 Eye-catching displays of running along with the t-shirt.

Business as usual at the 2022 Uttoxeter Festival of Running (Sunday 1 May) that returned to live racing after a two year break. A scenic, hilly course, outstanding performances and pink t-shirts were highlights of an action-packed day.

Race number 5 in the NSRRA programme, it was a well organised event by Uttoxeter Road Runners with a choice of a Half Marathon or 10K, the festival got underway in damp, cool conditions. A 2K Junior Fun Run took place at 9.45am where youngsters and their parents had their moment of glory around the Racecourse before the main event went under starter’s orders at 10.30am.

PB Pacers performed their job admirably, helping people to their goal time and supportive marshals also played their part, encouraging everyone around a countryside course that contained more than a few climbs. It was the opportunity to put the hill training to the test.

Boalloy RC’s Carl Moulton followed his new M40 record at Friday’s Mid-Cheshire 5K with victory in the Half Marathon. He ran strongly to win in 1:12:55 – over two minutes in front of Peter Nimmo (NSRRA) who was second in 1:15:10. Velo Runner’s Daniel Soltys finished third in 1:16:06.

An impressive win by Kelly Butler of City of Stoke AC in 1:26:13 with a gap of nearly seven minutes between her and second placed Amy Lowe of Washlands Women RC in 1:33:12. Amanda Kelly of Stoke FIT came third in 1:33:56.

In the 10K, Matthew Glover was first home in 38:02 closely followed by Owen Morgan of Burton AC in 38:04. City of Stoke AC’s Rebecca Harrison was third in 39:56 and the women’s winner.

All the results from the two races can be viewed via the runABC Midlands Race Listings page.

Finishers received a bright pink t-shirt that will stand out on training/club runs and is useful for when the nights start drawing in again.